“Where is this relationship going?”  It’s the age-old question every woman who’s dating wants to know the answer to.  In fact, many men want to know too.  The problem is, everyone wants to know the answer but no-one wants to ask the question.  No-one wants to ask because asking shows vulnerability and can lead to embarrassment.  What if you ask “Where are we going?” and the person says “To the bedroom” or even worse “Nowhere”?  How would one deal with that kind of rejection?

I’ll talk about how to find out if you and him are on the same page relationship-wise in a bit but first, 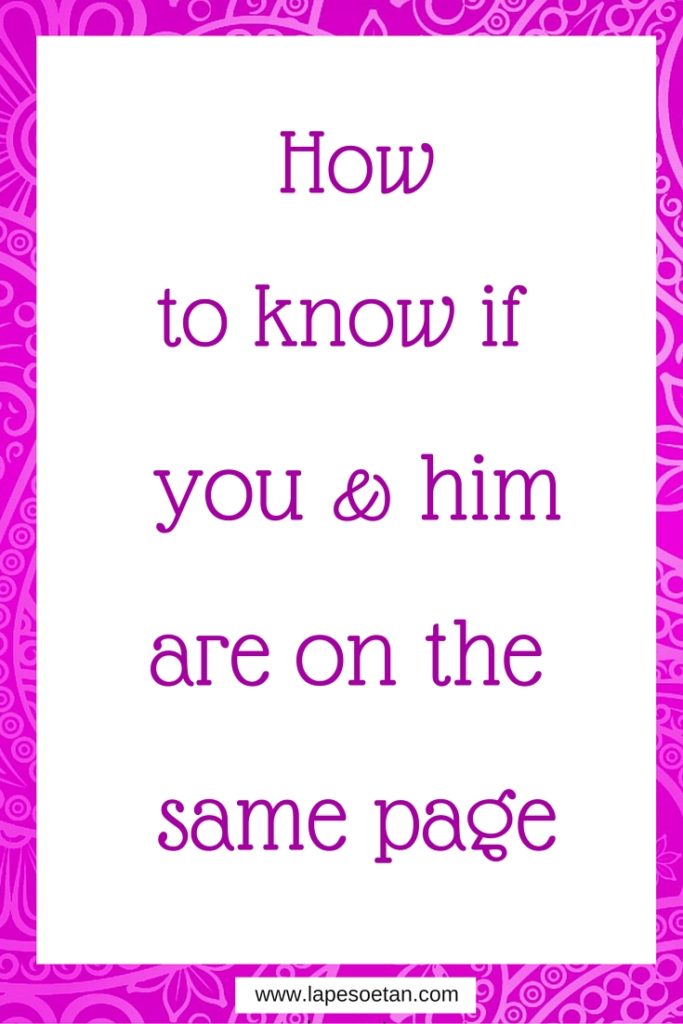 I feel the need to mention genotype and its relevance to relationships.  If you’re Nigerian and reading this blog, you probably know the importance of your genotype and that of the person you plan to marry.  For those who only have a vague idea, I’ll discuss the topic briefly.  A person with the SS genotype is said to have sickle cell, a disease which sometimes results in the person falling ill often.  That is the layman’s description of the term.  A biology textbook or Google would explain it better.  However, people often try to avoid having sickle cell babies and one way to do that is to make sure that if you have the AS genotype, you don’t marry or have children with someone with the AS or SS genotype.

The issue now is, at what stage when dating someone do you ask them what their genotype is?  If you ask too soon, the other person may think you’re a psycho who’s already planning a wedding and babies but if you wait too long, you risk being so deeply invested in the relationship that leaving becomes almost impossible.  My answer to this dilemma is to ask the other person about their genotype as soon as you’re comfortable doing so.  The same goes for the ‘Where is this relationship going’ question.

If you’re ready to get married and are dating someone you can imagine marrying, you need to find out if marriage and marriage to you in particular is on their mind.  The only real way to know is to ask them.  It’s true that you risk being told something you don’t want to hear but it’s much better than dating someone for years only for them to say they don’t feel ‘that way’ about you.

I used to think only women wanted to know where a relationship was headed but I’m beginning to meet more and more men who say they want to know if the woman they’re dating is in it for the long haul like they are.  I found out first-hand that men also want to know where a relationship is headed when a guy asked me if I saw myself being married to him a year later.  I wasn’t sure we would last till the end of that month so when he asked that question, I broke out in a cold sweat.  I didn’t answer the question then but I began to show that I didn’t feel the relationship had a future and soon after, we broke up.  While I didn’t answer the question verbally, I answered it with my behaviour.   It might not have been the answer the guy wanted but at least, he got an answer.

In the same way, if you want to know if a guy plans for you to be together forever you need to ask him.  What do you say?  You can ask “What do you want from me?” or “What are your plans for our relationship?” or “Where will we be in 2 years?”  More important than the question though is the answer.  If a guy is serious about the relationship, he will say so without any hesitation.  If he doesn’t see a future for the two of you, he will either say so or will show it.  If he doesn’t give a clear answer, please know that he doesn’t see the relationship going anywhere and perhaps doesn’t know how to tell you that.

What you need to do to find out if you and him have a future together is easy.  Getting an answer that you don’t want is tough to hear but at least, you’ll be sure how things stand and be able to move on to find someone who’ll be eager to make you part of his future.

If you want to find a great partner who will make you forget all the horrible people you dated in the past, I can help.  Book a 1-on-1 coaching session with me and I will give you the key points you need to find your man.  To book the 1 hour one-on-one coaching session with me, send an email to me lape(at)lapesoetan(dot)com and together, we’ll get you on the path to finding true love.