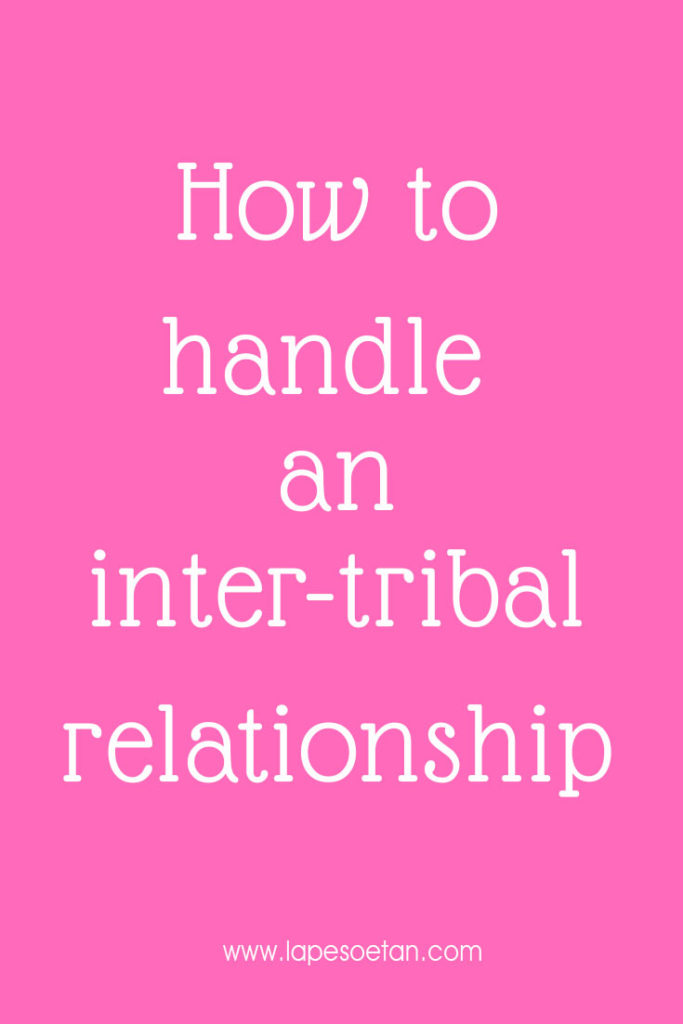 I’m an introvert so I keep a lot of what I think and how I feel in my head – much to my husband’s frustration.  He is always saying, “Lape, you need to talk.  I can’t know what you’re thinking if you don’t tell me.”  And so, I try but I’m still not very good at saying how I feel.  For the most part, I don’t talk because I feel my actions say everything.  I’m pretty open about my life and the way I live it so I always assume everyone knows everything about me.  Of course that’s not true and is actually kind of silly.  Most people are too focused on their lives to notice yours.

Which is why the other day, I was bemused when a lady I knew said to me, “You mean you’re married to an Ibo man?”  I thought everyone knew that.  But my surprise didn’t end there.  The lady went on to say “You’re a strong woman o!  You’re not even afraid.”  I was puzzled.  What was I supposed to be afraid of?  Wasn’t marriage itself a big step into the unknown?  How did it matter that my husband is Ibo?  In an instant, I remembered the way I used to feel before I got married.  At that point, I understood and smiled.

You see, while I am a Yoruba woman married to an Ibo man and none of my close friends or family were shocked that I had married outside my tribe, I was pretty surprised.  Where a guy came from never mattered to me when I was younger.  In fact, my most traumatic relationships were with Yoruba guys so I wasn’t too eager to marry within my tribe.  However, I never thought I would marry an Ibo man.  I had never dated one before.  I didn’t avoid them.  It just never happened but I’ll admit that I was wary of Ibo men.

The Ibo men I heard about or came across were domineering, didn’t think much of a woman’s opinion and believed that women should not inherit property.  I come from a part of Nigeria where female leaders are known and women inheriting property and building their own houses is the norm.  I didn’t know much about Ibo culture and what I knew made me afraid of Ibo men.  And that is the crux of the matter.  People fear what they do not know or understand.  I wondered if the woman who said I was strong knew any non-Ibo woman married to an Ibo man.  If she didn’t know any, that would fuel her fear and if she knew one who was in an unhappy marriage, it would add to her belief that only a brave non-Ibo woman would marry an Ibo man.  She would disregard all the same-tribe marriages she knew that were troubled and focus on the few non-Ibo-woman-married-to-an-Ibo-man marriages she knew that were in trouble.  It’s an illustration of that Anais Nin quote that goes “We don’t see things as they are, we see them as we are.”  Most people don’t look at the world to understand it.  They look at it seeking evidence to support what they already believe.

I’m not going to say an inter-tribal marriage is the same as marrying someone from your own tribe.  It isn’t.  However, I will say that tribe doesn’t matter.  What matters are the personalities of the two people involved in the marriage.  If my husband and I had been younger, perhaps we wouldn’t have gotten married.  Perhaps we would have been influenced by family, perhaps we would have let fear keep us apart.  Whatever the reason, we met at a time when we were wise enough to look beyond the tribe of the other person when deciding to get married.  We decided to get married because we felt we were right for each other.  I’m happy to say that the negativity we have received as regards our inter-tribal marriage has been minimal and perhaps that is an indication of progress in Nigeria.  Either way, I’m happy with my choice of spouse and I strongly suspect my husband is too.  Our tribes don’t matter in the grand scheme of things.  Besides, we really do come from the same place – God.

If you have endured break-up after break-up and want to get married but don’t know what to do, I can help.  Book a 1-on-1 coaching session with me today and I will give you the key points you need to find your ideal partner.  For details of my prices, click here.  Send an email to me lape(at)lapesoetan(dot)com and together, we’ll get you on the path to finding true love.