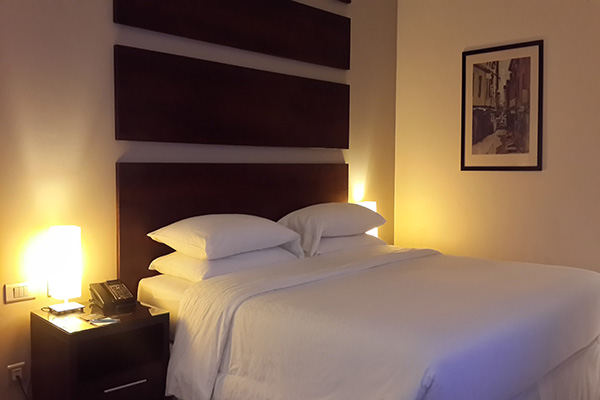 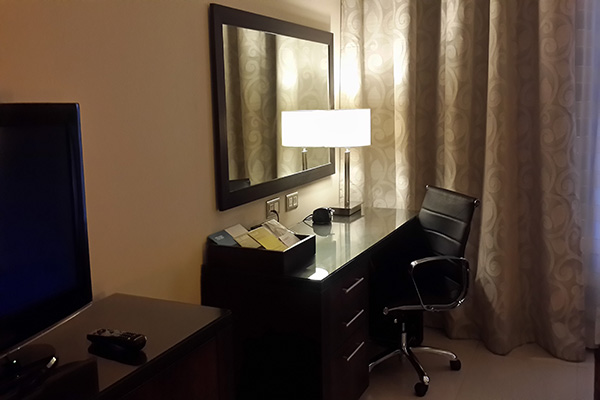 Writing desk in the hotel room

I think one of the first things that any visitor or guest at Four Points Lagos would notice would be the difficulty in finding parking space.  While the security men at the gate will let you in whether you come in an ancient saloon or a brand new SUV (which is a plus in image-obsessed Lagos), finding somewhere to park requires lots of luck.  There are places to park just outside the hotel but even those are often quickly filled.  The hotel has serious parking problems.

After checking in, a porter helped me take my luggage to my room and was leaving without dawdling to inspire a tip.  He actually had to be called back to take a tip – another unusual thing in Lagos.  My room at Four Points was clean with large windows allowing great views of Lagos – the view at night was particularly interesting – seeing the lights of the cars as they darted around would make you feel alive and like you’re in the thick of things.  Moving to the bathroom, I heard an odd dripping sound.  It turned out water was dripping onto the ceiling of the bathroom and leaking into the bathroom itself.  I reported the leak to reception and the following day, while I was out, I could tell someone had come into the bathroom to fix problem.  Sadly, later that day, the dripping started again.

On my last day at the hotel, I asked for a porter to come help me with my luggage and was told one was on his way.  I waited and waited.  I called the reception again and was told the same thing.  After waiting some more, I realised no-one was coming and hauled my suitcase myself.  It’s one thing if the hotel has a policy of not having porters (which would make me wonder how come there was one to help me when I checked in) but to tell me that a porter was on his way to me when he clearly wasn’t was plain annoying.

Four Points Lagos is in a great location, close to beaches and within walking distance of Palms shopping mall but with so many little things to annoy one like the problem with parking, the inefficient problem-fixing and the unenthusiastic staff, I wouldn’t be in a hurry to stay there again.

Want to know when a new blog post of mine comes up? All you need to do is subscribe.  It’s free!  Just enter your email address into the box on the right and click on the link that will be sent to your email address in order to activate your subscription.  Want to get in touch with me?  You can do so via Facebook, Twitter, Instagram, GooglePlus or by sending me an email.  I’m on on Pinterest andYouTube as well.  Woo-hoo!