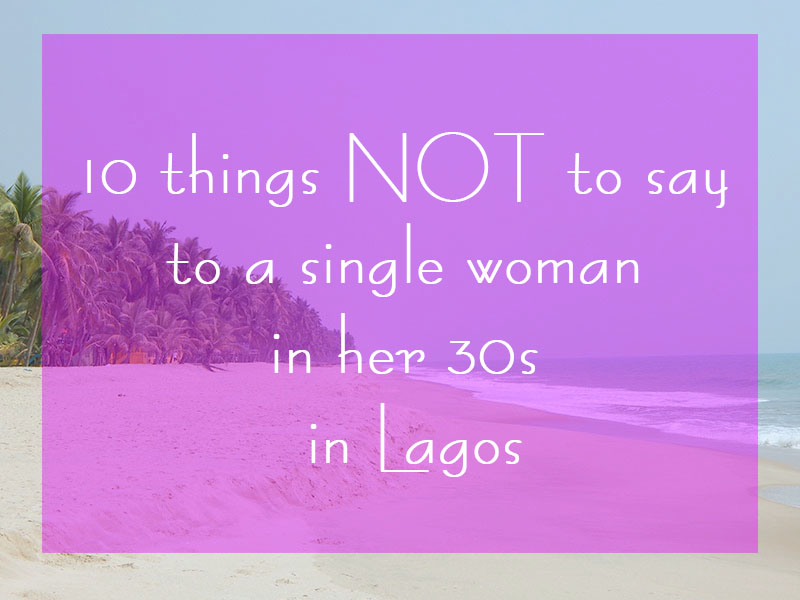 We Nigerians generally don’t mind our business.  It’s a good thing sometimes.  It means that if, for example, you fall over and faint, someone will probably come to your aid.  Other times, our innate curiosity is just an excuse to be rude.  If you know a single woman in her 30s in Lagos and aren’t sure what you should or shouldn’t say to her, the following will help a great deal.

I honestly don’t understand what people expect to hear in answer to this.  If you’re silly enough to ask this question, then you deserve whatever rude answer you get.

2  Have you prayed about it?

Prayed about what?  Being single is not an illness.  It is not a tragedy.  Of course, there are many single people who want to get married and who probably have prayed about it.  Your asking doesn’t make them feel better, it makes them feel worse.  If you’re so concerned about the single people you know, pray for them and unless they open up to you about how being single is a problem for them, keep your invasive questions and fake concern to yourself.

Here’s what that single woman is thinking when you say this to her, ‘Actually, I think I need to be more picky.  If I were then maybe stupid people like you wouldn’t be in my life.’

I don’t know what people mean by when they say this to single women.  Proud of what?  I think it’s one of those things Nigerians say when they mean something else.  So, as far as I’m concerned the sentence is meaningless and the person who says it doesn’t deserve to be acknowledged with a comment.

‘Really? I had no idea.  I thought time was standing still’, thinks the single woman to whom you say this.  But seriously, when you say this to a single woman, you’re implying that she needs to get her act together and get married.  You make her feel like there’s a race and she’s at the back.  If she ‘hurries up’ like you suggest and marries the first person who wants to marry her just so that she can be married and ends up unhappy, what then?  Will you be there to help her?  I doubt it so leave her alone.

I find this question bizarre.  Let’s skip the fact that in today’s world, you don’t need to be married to have children.  You don’t even need a partner to have children but let’s leave that topic for another day.  If a woman does want children and wants to have those children with the husband she hasn’t yet found, how will reminding her that she wants children help her find that man faster?  As in number 7 above, saying this to a single woman could make her rush into marriage, possibly the wrong one.  And who will be blamed when she is married and unhappy?  Certainly not you, so please think before you speak.

So?  First of all, we shouldn’t be comparing ourselves to other people.  We all have different paths to lead.  But since you started on the comparison track, the single woman is probably thinking ‘I bet I wasn’t as fat as you when you were my age.  Plus, I make more money than you do.  Even now.’

‘For you to get out of my face.’ is the right answer here.   Seriously though, I thought the answer to this question was obvious.  If a single woman has told you she would like to get married but hasn’t done so yet, it means she hasn’t found the right person.  Instead of asking silly questions, set her up with single guys you think would be a good match for her and not some random guy you know who happens to be single.  Put your nosey-parkering to good use.

To get my new book ‘How to be a single woman in your 30s in Lagos’, click here.