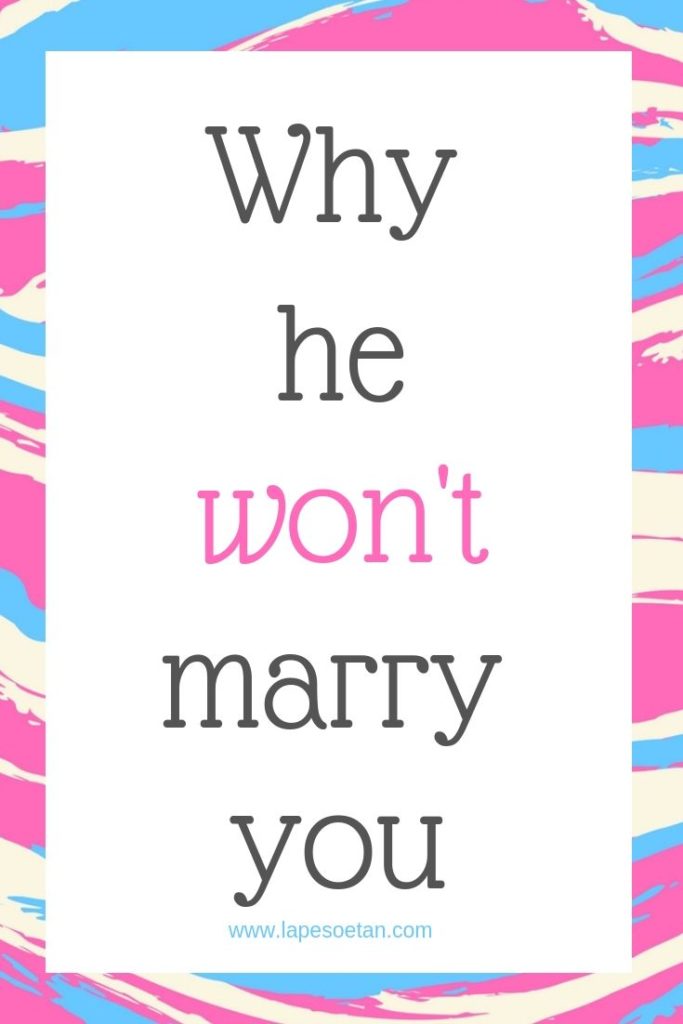 Have you dated a guy for years and years yet he shows no sign of marrying you?  This video is all about that.  Today, I’m going to be talking about why he won’t marry you and what you can do about it.

If he doesn’t want to marry you, he just won’t say anything or if he is quite a deceitful character, he will say he wants to marry you but then take no steps at all to make that happen.  For example, he will not discuss dates.  When it comes to talking about the wedding, he will turn it into fights and as for getting you a ring, that is just a dream.

Now, why he would continue to date you when he has no intentions of marrying you is the awful part.  There are 2 main reasons why a man would do that.  The 1st reason is that he sees no need to break up the relationship when he hasn’t found somebody else that he wants to marry.  I mean, with you, he’s getting good sex, attention and affection.  So why end that?

The 2nd reason why a man would continue to date you when he has no intention of marrying you is because he doesn’t want to hurt you.  It sounds counter-intuitive, right?  After all, dating you for years and years and not marrying you is hurting you but in his mind, that is not as bad as actually breaking up with you so he just continues dating you.  So, instead of actually breaking up with you and looking like a bad guy, he will start to act funny and do things that annoy in the hope that you will be the one that will break up the relationship.

Men are not stupid.  If he wants to marry you, he will.  I know that some women think that some men are not the marrying kind but I don’t believe that that is true.  Most men get married at some point in time in their lives.  They might do so later in life but eventually, they will get married.

What I have seen is that while a man might date a woman for years and years, even for 10 years and tell her that he’s not the marrying kind and tell other people that as well, what usually happens eventually is that he’ll meet a woman that he does want to marry and then he’ll break up with that woman that he has been dating for 10 years.

There are very very few people in this world that don’t get married.  It’s easy to find a woman who has not gotten married ever because in the world that we live in today, usually, a woman has to wait for a man to ask her to marry him.  But men don’t have that problem.

All in all, what I’m trying to say here is that if you’re in a relationship with a guy and you want to get married and he doesn’t want to, please move on.  Even if you love him, even if you think that he’s the best man in the world.  You might actually think he’s the best man in the world because you haven’t given someone else a chance.  And let it not be that when this relationship ends and the next person you date is a horrible person, don’t immediately think that you made a big mistake and that last person who didn’t want to marry you is the man destined for you.  It does not mean that.

That man that you’re hanging on to and dating for years and years may seem like the best man in the world but that’s because you haven’t tried someone else.  Someone once told me that if you don’t leave John Holt, you won’t know that they’re selling things at UAC.  And nowhere is that as relevant as it is in this case.  Move on from someone who is stringing you along and someone better will come your way.

I hope you found this post helpful.  If you want daily tips from me on how to be happy while you’re single and how to attract the right person for you into your life, follow me on Instagram by clicking here.  If you want my free ebooks on love and relationships for the single woman over the age of 30, click here.