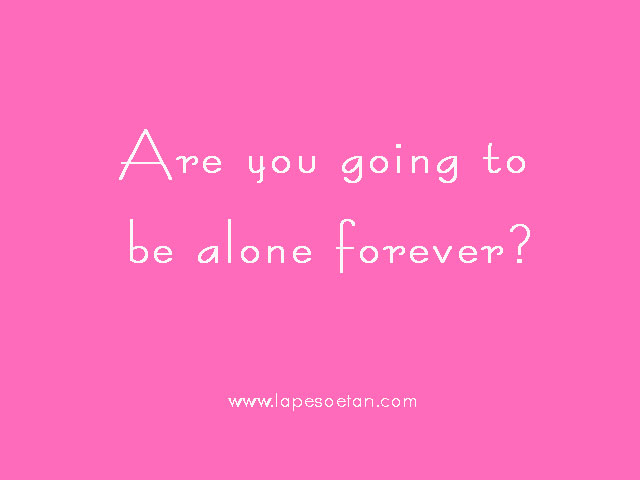 One of my favourite books is Bridget Jones’ Diary by Helen Fielding.  In the (highly unlikely) event that you’ve never read the book (or watched the movie), Bridget Jones’ Diary is about the life of a single 30-something year old British woman and her desperate desire to find love.  It’s a very funny book about a charming woman who goes through a few dating mishaps before eventually finding love.  There’s a part of the book that talks about Bridget and her friends worried that one day, one of them would die alone in their flat and not be discovered until days later when their body has been half-eaten by an Alsatian.  When I first read Bridget Jones’ Diary, I was in my late twenties and laughed really hard at that part of the story.  It seemed so melodramatic!  Why on earth did they think they would die alone and that no-one would find them until later?  Ridiculous.

Fast-forward a few years and I wasn’t laughing so much anymore.  I had been single for a few years and the possibility of dying alone seemed very real.  I was getting more afraid that I would live alone and die alone.  The fear grew and grew until one day, I decided to do something about it.  I couldn’t continue to live in fear like that.  It made no sense so here’s what I did:

This fear of being alone forever was just that – a fear.  I had no idea if it would happen and if I looked around me, I had to admit it was unlikely.  I knew very few women who had grown to be old and died single.  In fact, I didn’t know any.  I knew women who were separated or divorced, yes, but none who had been single all their lives.  Furthermore, none of the women I knew who had died single had died alone.  They had died surrounded by people who loved them.  Statistically, the chances of me being single forever and dying alone were low.

Would it be so terrible if I stayed single forever?  By ‘single’ here, I mean ‘unmarried’.  I knew that it was highly unlikely that I would never again have a boyfriend/ partner/ manfriend till I died.  People generally have relationships.  Relationships don’t always work out but they happen pretty often.  So, the worry of never having a loving romantic relationship again was out.  And if I never got married, was it such a big deal?  Fine, it reduced my chances of having children (which many married people don’t have anyway) and it meant I wouldn’t have someone to call ‘my own’, watch TV with or to complain about work to but that didn’t mean I would be sad forever.  I would have periods of unhappiness and self-pity but if I planned it right, I would be happy in spite of being a single old lady.

Having rationalised my fear of being alone forever, I set about creating a life I loved or at least, liked (I had to start somewhere :-)).  I came up with a list of things I liked to do (eating at restaurants, travelling and reading) and tried to do as much of it as possible.  As soon as I started building a life I liked and became happier, I started attracting more men.  That’s just the way life is.   Once you take the worry off something, that thing starts to bloom.

Sometimes, single women tell me they feel like they’ll be alone forever and usually, I laugh.  Not because I’m being mean but because I remember Bridget Jones and I remember I used to feel that way too.  To those women and to anyone reading this and feeling that way, I say: you will only be alone if that is what you truly want.  To help you get out of that mindset and situation, try a few of the tips I’ve written in this article.  I’m sure they will help and when they do, please let me know.