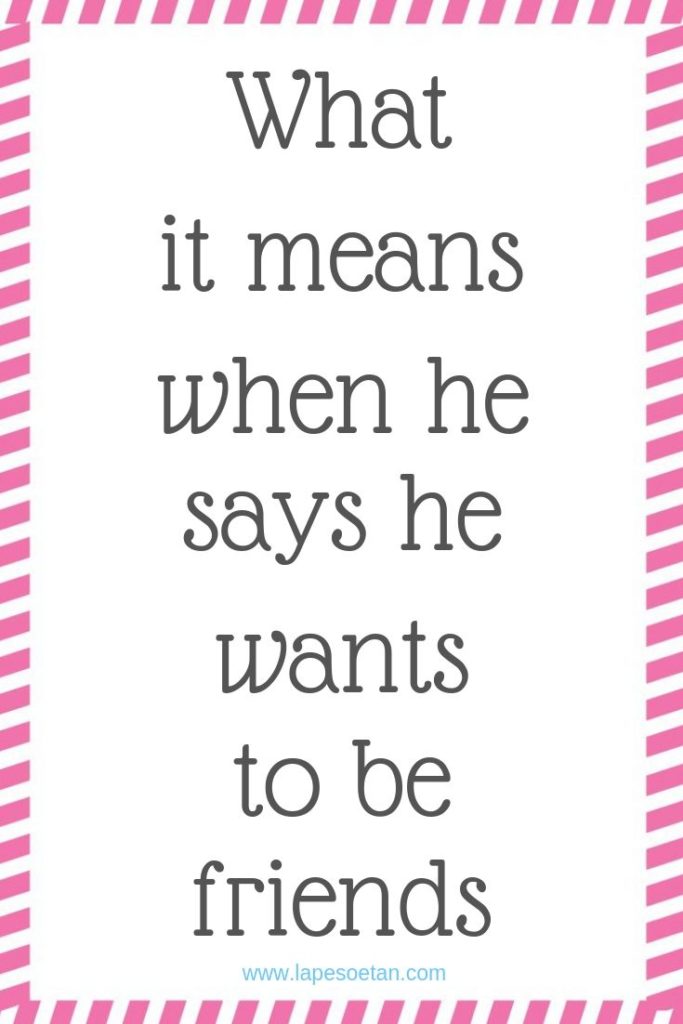 As I find myself saying over and over again, men and women are so different, sometimes it seems as if we’re speaking different languages entirely.  So today, I’m going to be playing ‘interpreter’ again.  Today, I’m going to be talking about what it means when he says he wants to be friends.

When a man says he wants to be friends, it can mean very different things.  It depends on who you are to him and what stage you guys are at in your relationship.  Let’s say you just met a guy and he is hitting on you but you have no interest in him.  After a while, he might say something like, “Look, I’m not trying to get with you.  I just want us to be friends.”  In this situation, that is a straight-up lie.  He doesn’t want to be friends; he wants to sleep with you.

Let’s go to situation number 2.  In this situation, you and a guy are having something.  You guys go out from time to time and you make out regularly.  But you haven’t actually defined your relationship.  You, at this stage, are now finally tired of whatever limbo you’re in and you ask him. “What exactly are we doing together?  Are we a couple or what?”

Instead of directly answering your question, he says something like, he just wants you guys to be friends.  You take him at his word but before you know it, he has called you up again and you’ve gone to see him, you guys have made out.  You get back home and you’re confused.  If he just wants to be friends, why is he making out with you?

He is doing it because he can.  He has found out that with you, he can get what he wants – attention and affection without the perceived stress of being a boyfriend.  In a way, in this situation, he is being honest.  He DOES want to be friends.  It’s just that he wants to be friends with benefits.

This has been one of my bluntest blog posts.  All the same, I hope you found it helpful.  That’s what I’m here for.  If you want daily tips from me on how to find happiness while you’re single and how to attract the right man for you, follow me on Instagram by clicking here.

Get my free ebooks on love and relationships for the single woman over the age of 30 by clicking here.  I hope you enjoyed this post again.  If you did, please share it with your friends and also subscribe to my YouTube channel.  You can subscribe to my YouTube channel by clicking here.  After you subscribe, remember to click on the bell that you’ll see there so that you’ll be notified as soon as a new video of mine comes out.  I wish you love and strength.