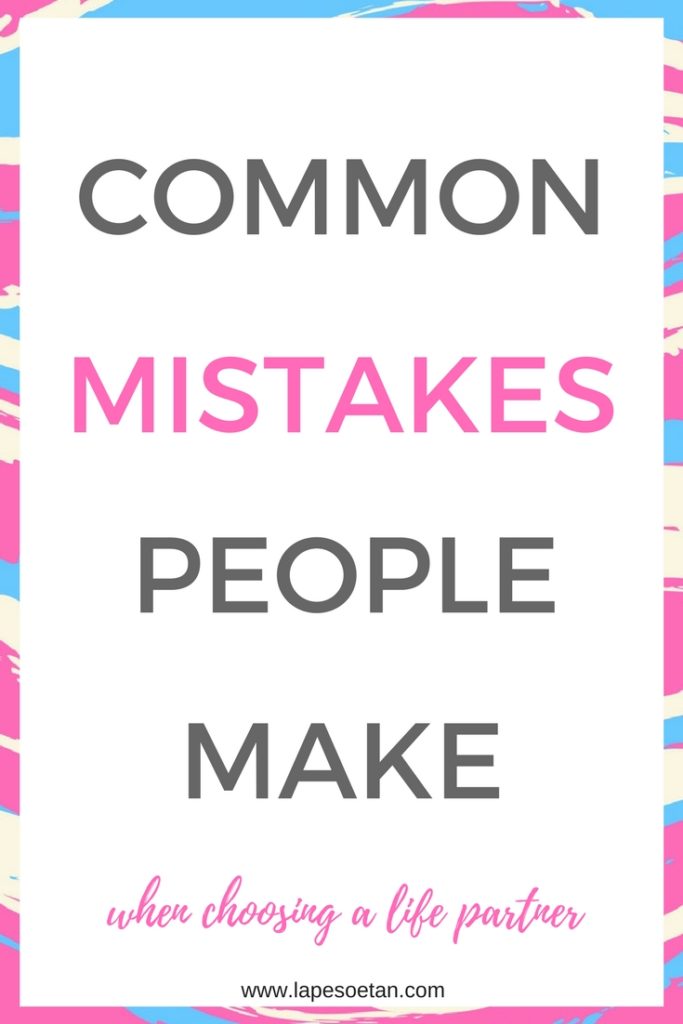 The 1st mistake that women make when choosing a life partner is choosing based on other people’s opinions.  These ‘other people’ can be friends, they can be family, they can be mentors, they can be anyone really.  But the thing is that no matter how well anyone knows you, nobody knows you as well as you know yourself.  You alone know the kind of person that will make you happy.  So, listening to other people and dating somebody or marrying somebody based on their opinion is not necessarily a good idea.

You have to realise that sometimes when people recommend somebody to you, they’re doing so based on what they would want in an ideal partner and what they would want in a life partner could be very different from what you would want.  It’s like the cliché goes – one man’s meat is another man’s poison.  It really is true here.  What one person thinks is a dream guy could be your idea of a nightmare.  So, when it comes to choosing a life partner, don’t choose based on other people’s opinions.

Another mistake women make when choosing a life partner is choosing based only on money.  Now, in today’s world, money is very important.  I wish it wasn’t but we need money for basics – things like food and shelter.  But for women, money often means something more.  Money often means security as well.  Sometimes, being with a man who can provide for you makes you feel safer and makes you feel like he will look after you now and will look after your children as well.

I understand all of that.  However, one thing we need to realise is that money comes and goes and if we choose somebody based only on money, what happens when the money goes?  If there’s nothing in the person that you like and his money leaves, you’re going to lose interest in him, the relationship will quickly sour and it might even end.

Another thing you have to realise about money is that it is very easy to get used to.  After you’ve shopped in London, New York and Milan, you’re kind of tired.  You start to wonder if there isn’t any more to life.  You’re more likely to think that way if you’re with a guy you can barely stand and you’re only with him for his money.

In addition, a man having money does NOT mean he’ll be able to give you what you want emotionally.  He might be able to buy you anything in the world but really, all you want is for him to come home at night to you and he’s not doing that. For those reasons, you shouldn’t choose a man or a life partner only based on money.

The 3rd mistake I’ll mention that women make when choosing a life partner is rushing their decision.  You might be 34 years old, you might be pregnant, you might be a single mother but you should never rush your decision to marry.  It’s better to take your time and decide that you truly want to get married to this person than to rush into it and regret it later.

Sometimes, women rush into marriage or into choosing a life partner because they’re scared that the person will change their mind but the thing is that, if someone decides to change their mind about marrying you, it’s actually a blessing in disguise.  Imagine if you got married to the person and then the person decided that they’ve changed their mind about you and they don’t want to be married to you anymore.  How would you feel then?  The misery you would feel in that situation is ten times worse than you would feel if the person decided that he didn’t want to marry you or be with you before marriage.  When choosing a life partner, take your time.  Don’t rush your decision.

I hope you enjoyed this video.  Get daily tips on love and relationships from me on Instagram.  If you enjoyed this blog post, please share it with your friends and also subscribe to my YouTube channel.   After you click on the ‘subscribe’ button there, also click on the bell that will appear so you’ll be notified as soon as a new video of mine comes out.  If you want my free e-books, you can get them here.  I wish you love and strength.