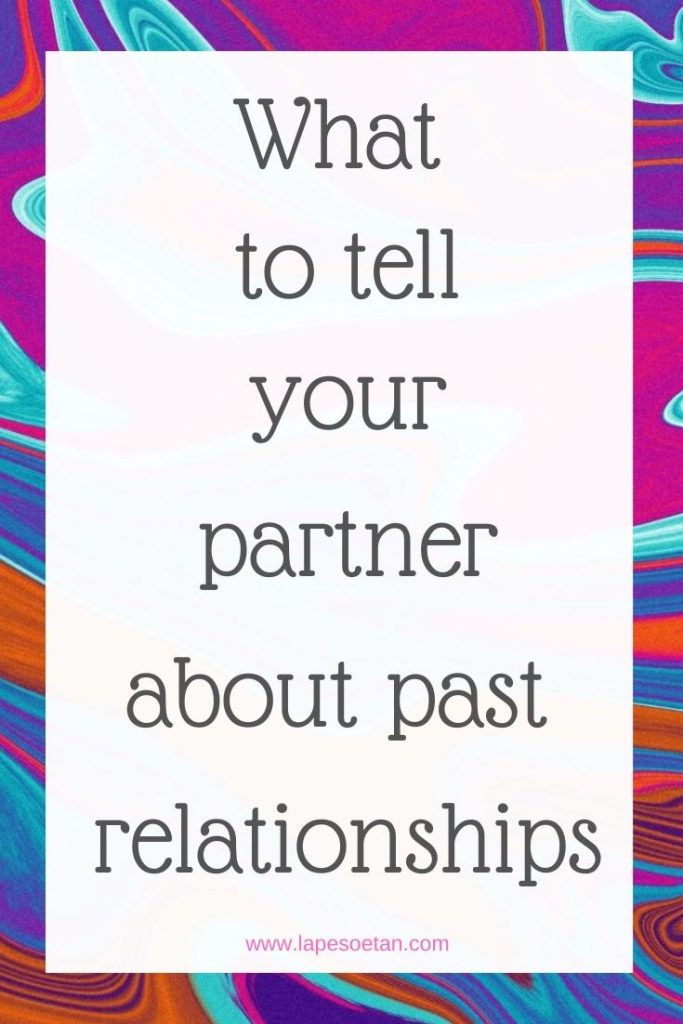 Today’s topic is a particularly important one, especially for women because in today’s world, women are still judged for the number of sexual partners they’ve had.  A man could have slept with one hundred people but it won’t be seen as anything negative.  In fact, it’s almost seen as a positive.

He is seen as a stud, as if he is doing something great but if a woman sleeps with ten people, it is considered a scandal – at least, it still is in countries like Nigeria where I live.  So I think today’s topic, which is a requested one by the way, is particularly relevant.  Today, I’m going to be talking about what to tell your partner about past relationships.

I think what you should tell your partner about past relationships depends on how long you’ve been dating the person and how serious both of you consider that relationship.  If you’ve been dating somebody for only, let’s say 3 months, I don’t see any reason why you should give the person a full run-down of your history of sexual partners – not unless you want to, that is.

Some women believe in revealing everything about themselves including their sexual history with a man as soon as they start dating.  I’m not such a fan of that because I’ve found that men are not really geared towards being able to handle that kind of emotion.  When that kind of emotion is revealed to men too early, they tend to run away.

The next thing I want to talk about here is what kind of information to reveal to your partner about your past.  Like I said in an old video of mine (which you can watch here), I said that I read somewhere that the ideal number of sexual partners that a woman should tell a man that she’s interested in that she has had is three.

Apparently, that number is just right.  It tells the man that you’re not exactly a sexual novice because some men actually don’t want that but it also tells the man that you’re not this extremely wild, promiscuous woman and that number is not enough to scare them away.  Many men apparently don’t want a woman who seems to be more sexually experienced than they are.

I know all that sounds dated, fake and unfair but the world generally isn’t fair to women, particularly when it comes to sex.  Incidentally, you can tell a man that you’ve only slept with 3 men and he’ll know deep inside him that you’ve probably slept with more men but because he doesn’t want to upset his mind too much, he’s not going to investigate that matter a lot.  He’s just going to accept what you tell him and move on from there.

There are many men out there who don’t really care how many men their woman has slept with.  They’re fine with the woman they’re dating having had more sexual experience than they have but I believe that men like that are in the minority, particularly in a conservative society like Nigeria.

Another thing about what to tell your partner about past relationships is that when the relationship seems serious, perhaps when you’re talking about getting married, it’s probably best to bring up issues that are very important to you or situations in which you have been traumatised or similar things like that.  This is so that he doesn’t find out that information after you get married and then now talk about feeling deceived or feeling like you hid things from him.

When the relationship is serious, you might want to tell him if you’ve been raped in the past, if you’ve had an abortion, if you’ve slept with one of his friends, if you already have a child or anything else that you feel comfortable with.  Of course, revealing all this kind of emotion could result in the man leaving and also sharing that information with people that you would not want to have told that thing.  But that is a risk worth taking.

If you tell a partner who is apparently serious about you this kind of information and he leaves, know that that man was not meant for you.  That relationship, even if it had led to marriage, would probably not have been a happy one anyway.  Keep your head up and know that the right person for you will come your way soon.

For more love and relationship content that you won’t find here on my channel, listen to my podcast.  Click here to subscribe and listen to the podcast free of charge.  If you want daily tips from me on how to attract the right person for you into your life and how to be happy while you’re single, then follow me on Instagram.  I’ve written a whole load of books for the single woman over the age of 30.  All these books are about love and relationships.  If you want to get them free of charge, click here.