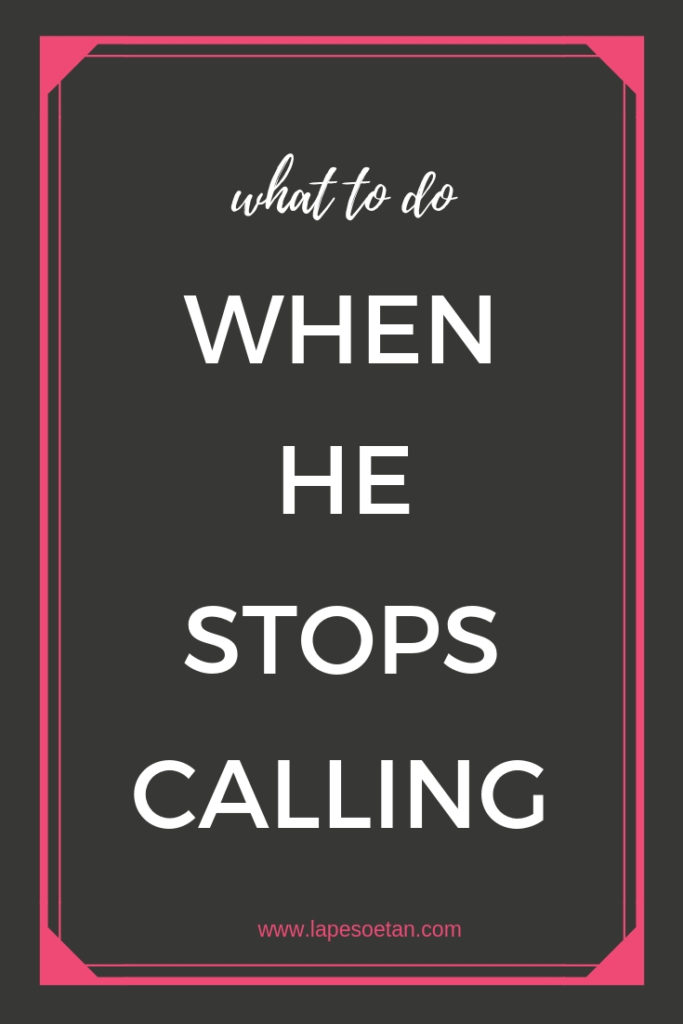 In my work as a relationship coach, one of the situations women describe to me over and over again is when they meet a guy, in real life or online, and they’ve been getting along.  They’ve been chatting, they’ve been talking, everything seems good when all of a sudden, they stop hearing from the guy.

This happens in one of two ways.  Sometimes, it’s that the guy starts giving one word answers and then his conversation tapers off until they stop hearing from him.  Or sometimes, the woman and the man chat for a long time like a normal day and then the following day, they just don’t hear from him.  He stops replying your messages, he stops taking your calls.  It’s as if he has just disappeared.  Has this ever happened to you and you wondered what to do?  If that’s the case, you’re in luck because in this video, I’m going to be talking about what to do when he stops calling.

He knows your phone number.  He knows your address, perhaps.  He knows how to get in touch with you.  If he’s not getting in touch with you, it’s because he doesn’t want to.  And no, don’t tell yourself that he has fallen down somewhere and died or that he is ill or that something is wrong.  Nothing is wrong.  He just decided to stop getting in touch.

The second thing to realise is that he probably is just not that into you.  I’m sorry I have to say that.  I hate it when I have to say something that is not so upbeat or not so fun and that women may not like to hear but I have to tell the truth at this kind of time because I want you to get better and I want you to heal and I want you to know more and do more and get better relationships and it’s by telling you the truth that that can happen.  If he’s behaving like this, it’s because he’s just not that into you.  Forget about him.  It’s going to be difficult at first but know that it’s possible.  Forget about him and move on.

The third thing to realise is that he is playing.  This is just a game to him.  So if you’re not into games, let him go.  Kick him out of your life.  The thing is that even though it seems strange right now, he is probably going to call you and messaging you once again.  He’ll do that when he realises that you’re over him, you’ve stopped calling him and you’ve stopped trying to get in touch.  He will definitely come back.  But when he comes back, use common sense and know that this guy is never going to change.  He is not for you.

So if you’re looking for a serious relationship or you want to get married, this guy is probably NOT the right guy to do it with because even if he apologises and promises to change, he will never actually change.  Even if he does marry you, he is always going to be messing with your head because that’s what he was doing before he married you.  He is going to continue it afterwards.  Save yourself the heartache and kick him out of your phone and out of your life.

I hope you enjoyed this post.  You can get daily love and relationship tips from me on Instagram by clicking here.   I also have a lot of free e-books for single women over the age of 30 sharing how to be happy while single and also how to attract the right guy.  If you want to get access to those free e-books, click here.

Find out more about my love and relationship e-courses by clicking here.  If you enjoyed this post, please share it with your friends.  I wish you love and strength!