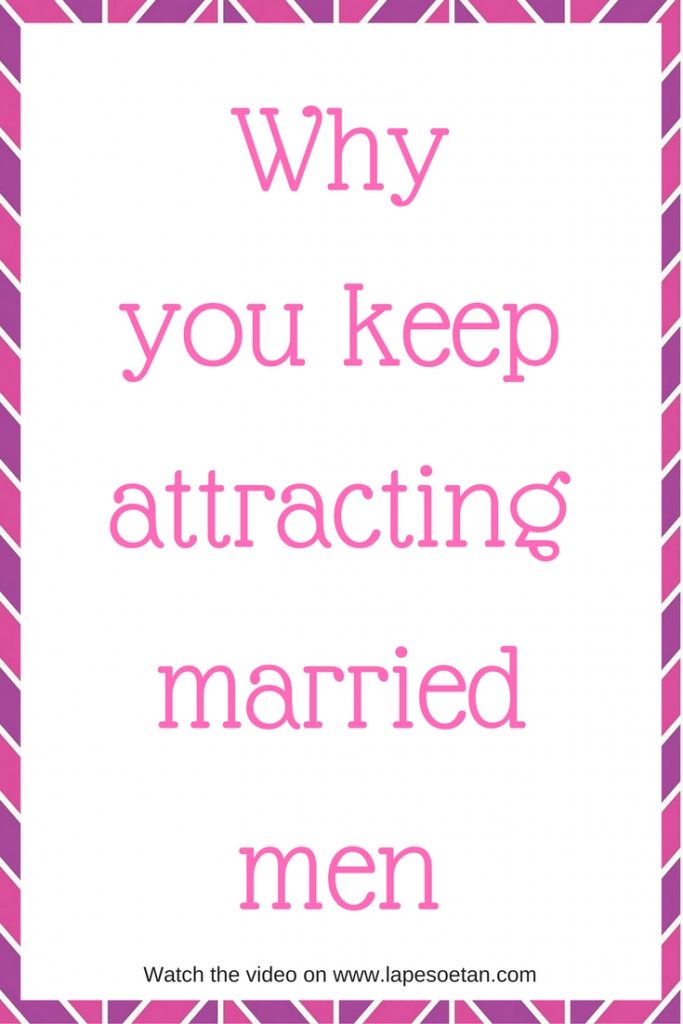 Single women often tell me they are sick of attracting married men.  Some tell me they don’t know why it keeps happening to them and others hint at the idea that it’s supernatural.  I get questions on this topic so often that I decided to create a blog post based on it.

Click on the image below to watch the video.

Now, you might also find that it’s not just married men that you’re attracting.  Some girls tell me that they keep attracting the same kind of guy over and over again.  For example, they might keep attracting younger men or they might keep attracting arty guys, you know, the guys that have woven hair and things like that and they don’t like it.  If that keeps happening to you, you need to sit down one day and ask yourself, “Why do you keep attracting this particular kind of guy?”  Because it’s like they say, you’re the common denominator.  You’re the only one who keeps repeating that situation so there must be something that’s happening in your life.  There must be something that you’re doing so sit down and think about it.

In your heart of hearts, is there something about this particular kind of man that you find attractive?  You don’t have to talk to anybody about this.  Just talk to yourself so you have to be honest with yourself.  You can be honest with yourself when it’s just you.  Is there something about younger guys that you secretly like?  Do you like their eagerness for life?  Is there something about married men that you like?  Married men tend to be confident.  Is it that confidence you’re looking for?  What about artsy guys?  A lot of them tend to be laid back.  Are you attracted to somebody who is not as ambitious as you, who just takes life easy?

Be honest with yourself.  If that is the truth, you have to admit it to yourself and then write that down as a quality you’re looking for in your ideal guy.  It does not mean that you have to date the younger man or the married man or the arty guy.  It just means that this particular quality is something that is important to you and you would like your ideal man to have it.

It might seem difficult because for some women, for example, they might say “Out of 5 guys that hit on me last month, 4 of them were married.  What am I supposed to do?  Will I never date anybody again?”  You just have to be patient.  If you’re going to be single for six months or one year, perhaps take that decision but don’t keep entertaining the kind of man you don’t want.  Then pay attention to the kind of man you do want, the kind of man who is slightly different from what you usually attract.

For example, like I mentioned earlier, if a woman had 5 toasters last month and 4 of them were married, she should ignore the 4 that were married and the one that wasn’t married, pay attention to him.  Consider giving him your phone number.  If he’s not ideal for you, let him go but stop paying attention to the kind of man that you don’t want.  Please.

I hope you enjoyed this video.  If you did, please give it a thumbs up and share it with your friends.  Also, please subscribe to my YouTube channel.  Also, if you would like to buy any of my e-books, just click here.