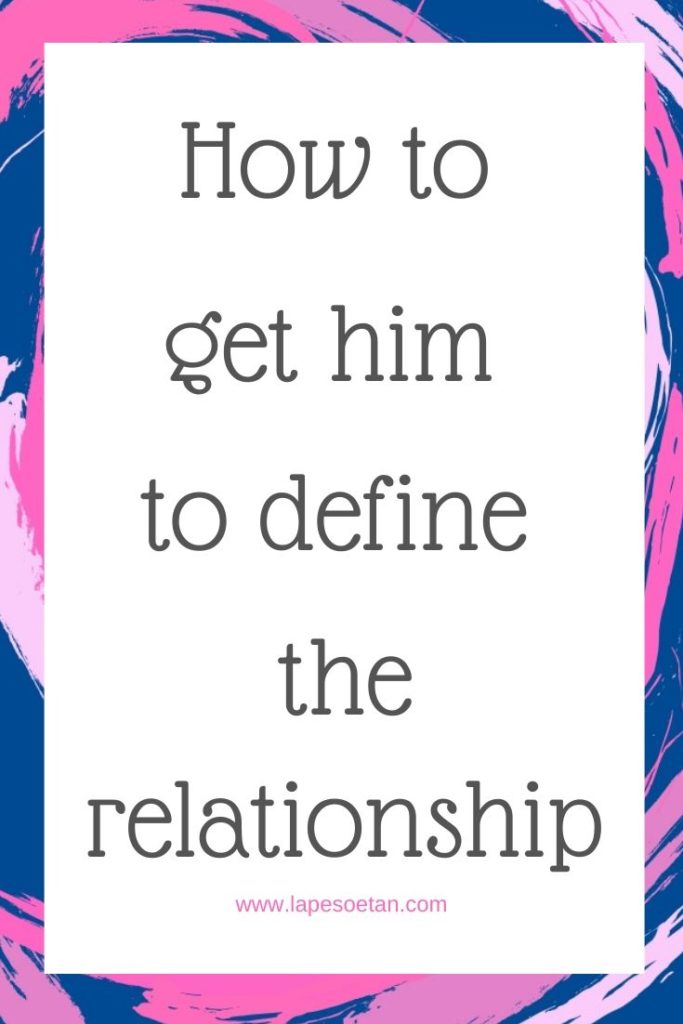 Let’s say you met this guy.  You guys like each other and have started dating.  You’ve been seeing each other for a while now but there’s something bugging you.  At the back of your mind, you’re wondering, “What are you guys doing?  Are you guys official now?  Are the two of you exclusive?  Are you boyfriend and girlfriend?  What exactly are you?”  I’m going to help you answer those questions today because today, I’m going to be talking about how to get him to define the relationship.

Ask him something like, “What would you say I am to you?” or even more direct, ask him, “Are we boyfriend and girlfriend?”  The more direct your question, the better for you.  If you ask a direct question like, “Are we boyfriend and girlfriend?”, which by the way can be answered with a simple ‘yes’ or ‘no’, if he gives a convoluted answer or he avoids answering the question, you essentially have your answer.  He is not interested in being in a relationship with you.  I’m sorry I have to be so blunt but I don’t want you to find yourself in a situationship instead of a relationship.

For more love and relationship content that you won’t find anywhere else, listen to my podcast.  You can subscribe to my podcast and listen to it by clicking here.  If you want daily tips from me on how to be happy while single and how to attract the man for you into your life, follow me on Instagram.

I’ve written a lot of ebooks for the single woman over the age of 30.  These ebooks talk about how to attract the right man for you, how to find happiness while you’re single, how to build a life that you love.  You can get them for free here.

I hope you found this video useful.  If you did, please give it a ‘thumbs up’ below, share it with your friends and subscribe to my YouTube channel.  You can subscribe to my YouTube channel by clicking here.  After you subscribe, remember to click on the bell that you’ll see there so that you’ll be notified as soon as a new video of mine comes out.  I wish you love and strength!