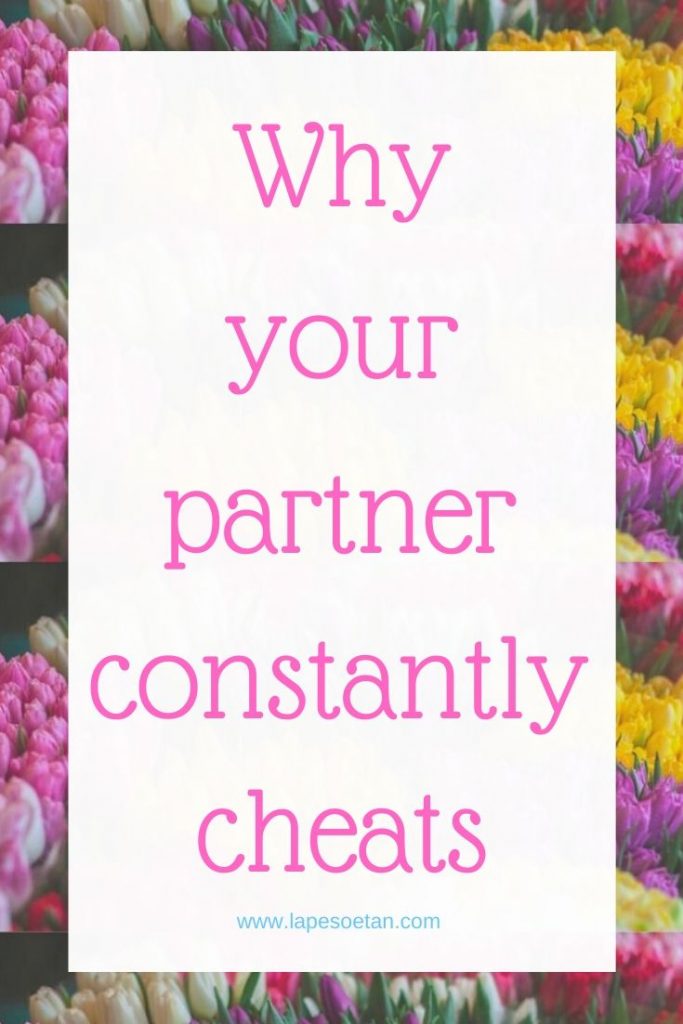 If you talk to women about relationships for any length of time, it won’t take long before the conversation drifts to how men cheat all the time.  That’s the reality for many women in relationships so I’m hoping to help with this video.  Today, I’m going to be talking about why your partner constantly cheats.

I once heard a story about a woman whose husband always slept with the househelp.  The woman would hire a househelp, her husband would sleep with her, she would fire the help, hire another one, the husband would sleep with that one too and then the cycle would begin all over again.  Finally one day, the woman asked her husband calmly why he was doing that, why he kept sleeping with their help and what he said was that he liked the way the househelp smelt.  He liked what he described as their raw, natural smell.  So, his wife stopped wearing deodorant, she stopped wearing perfume, she just wanted to smell ‘natural and raw’ like he said he liked.  And do you know what happened?  Her husband still continued sleeping with the househelp.

The point of that little story was to let you know that most of the time, when it comes to somebody constantly cheating, the problem is not with you, it is with them.  Don’t get me wrong – there are cases where men say they feel forced to cheat.  For example: a woman might tell her husband that she doesn’t see any need for them to have sex anymore because they’ve had all the children that they’re going to have so, in her opinion, there’s no more need for sex.

Or a woman constantly accuses her husband of cheating.  The husband is NOT cheating but gets tired of constantly being accused so in the end, he decides to cheat.  After all, he is already being accused of it so he might as well do it anyway.  Or perhaps the relationship has broken down to such an extent that the couple barely talks so sex is out of the question meaning that the man goes somewhere else to get it.

So, there are many cases in which the man may feel forced to cheat but even in those cases, it’s not about something that the person who was cheated on did.  It’s about the person who took the decision to cheat.  So, if you’re a woman and you’re in a relationship with a man who constantly cheats and you’re wondering what you’re doing wrong, stop blaming yourself.  The biggest thing you have done wrong is to stay in a relationship that is making you unhappy.  Other than that, your partner isn’t cheating because you’re too tall, thin, fat or short or whatever.  He is cheating because that is the decision that he has taken.

Like I said earlier, there are a million and one reasons why he is cheating.  But the thing that you should know is that most of the time, it’s not because of something that you did.  It’s because of something in him.  What you need to do now is to decide whether you’re going to stay and try to ride out the drama or whether you’re going to leave for your sanity and happiness.  You are in control of your life.  Remember that.

For more love and relationship content that you won’t find here on my channel, listen to my podcast.  Click here to subscribe and listen to the podcast for free.  I’ve written a lot of ebooks for single men and women over the age of 30.  These ebooks are about love and relationships.  If you want to get them for free, click here.