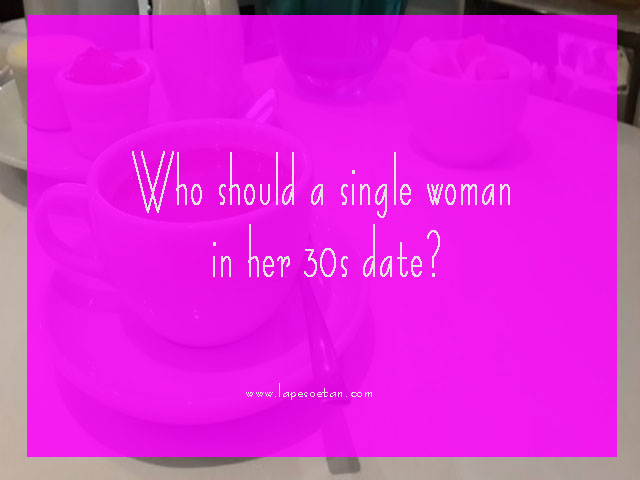 Many single women in their 30s are looking for a formula when it comes to dating.  The average 30-something single woman has probably had several bad relationships and is looking for something that will tell her the type of man to avoid so she doesn’t have another dead-end relationship.  For many women, age is an indicator of who she should or shouldn’t date.  Should a single woman in her 30s date a man younger, older or the same age as her?  I’ve written this post in an attempt to answer that question.

I once met a guy who was younger than me and who showed he was interested in me.  I was wary but not totally against the idea.  I mentioned the guy to an acquaintance and she told me the guy was not for me.  She barely knew me and didn’t know the guy at all but was so clear about her opinion that I was intrigued and asked her why she felt dating the guy would be a bad idea.  Her answer?  That I would intimidate the guy.  I instantly knew what she meant but dated him anyway.  Another one of those decisions that I took in spite of my better judgment.  Naturally, my friend turned out to be right.  On the other hand, I have a friend who is married to a man younger than she is and she is the happiest of all my married friends.  Dating a younger guy turned out well for her.

Of all the married couples I know, a vast majority of the women are married to men their age or slightly older.  That seems to be the norm, at least in Nigeria.  Generally, women are advised to marry men older than them.  The theory is that women are emotionally older than men so for a woman to be on the same level emotionally as her partner, that man should be older than she is.  Some single women in their 30s don’t think much of that though.  I’ve heard single women in their 30s say they want to marry men their age or younger.  It seems the thinking here is that they want a man who has the same interests as them.  One woman I know who strongly believes in marrying a man who is the same age as her or younger is still single and searching.

I never had any rules about the age of the person I would date or marry.  I just wanted a man who would make me laugh and be kind to me.  In the end, I married someone 15 years older than me.  My friends told me they were not surprised about my choice.  My father was 42 when I was born and the youngest of my brothers is 7 years older than me.  I have grown up around older men.  Perhaps without realising it, I have always seen older men as intelligent and caring.

There are women married to men their age or men 20 years older than them who are sad in their marriage.  There are women with husbands 2 years younger than them who have been happily married for 40 years.  The truth is that there is no dating formula.  A woman in her 30s will be happy in her relationship if that relationship is with the man who is right for her no matter how old he is.