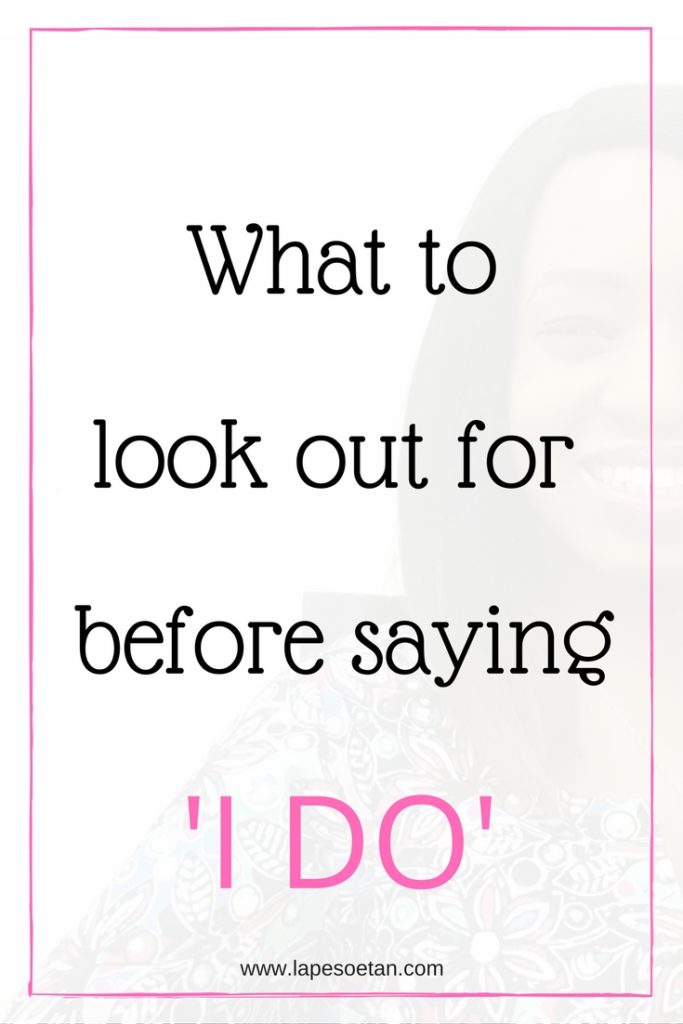 Today, I’m going to be talking about what to look out for before saying ‘I do’.  This is a question that a few people have asked me before so I decided to make a video about it.

The most important thing to do before agreeing to marry a guy is to be sure what he wants before you get married.  Look at the way he treats you BEFORE you get married.  That is so so important.  If he yells at you, or he slaps you or does things that make you feel uncomfortable then you need to stay away.

Also, you need to watch how he treats people who he considers lower in status than him.  That might include his younger sister, it might include the help at home or drivers, shop attendants and other people like that.  Look at how he treats them.  If he is nasty to them, then he could very well turn on you.  Keep an eye out for that.

I have to tell you about a situation I know of.  This guy, for example, he never used to hit his girlfriend but he used to beat his sister.  He used to beat his sister a lot.  In fact, one day, he beat her so much that she passed out and had to be taken to hospital.  Do you know that the woman I know married this guy even though he didn’t beat her BUT after they got married, he started beating her and the truth is that she did see the signs.  Somebody who can beat his own sister until she passes out – that is NOT the person that you should marry.  That is not the person for you.  That is why it is so important to look at how a guy behaves before you get married.  It is so important.

I’m a relationship coach who helps single women over 30 attract the right relationship into their lives and I’ve written a ton of e-books.  You can get some of my e-books by clicking here.