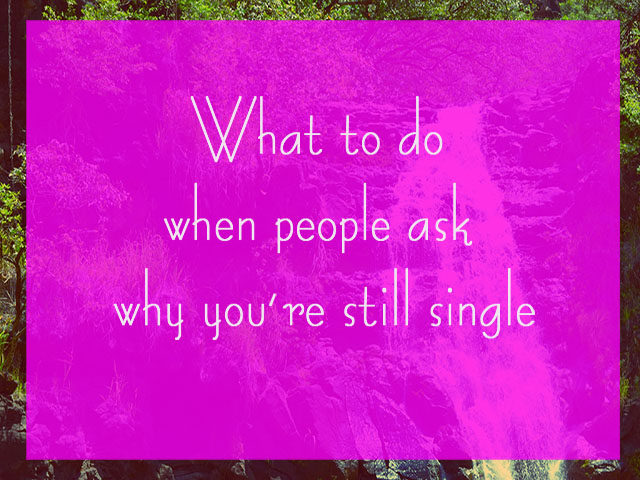 I’ve noticed that this question usually comes from people who are married.  It reminds me anew how forgetful people can be.  Do they not remember how much they hated being asked that question when they themselves were single?  Is it a thinly-veiled insult?  Is it another way people have found to show off?  The mind boggles.

Someone I know takes this question as an insult and replies with ingenuity.  For example, when a man she knew asked why she was still single at her age (she was over 30), she replied, “ Probably the same reason you don’t have children.  It’s not God’s time yet.”  In reply to the same question from a female colleague, she said “Probably the same reason your husband doesn’t have a job.  I’m waiting for the right one to come along.”  The lady’s answers might seem harsh but some people push you to the brink, especially when it’s clear they’re not asking out of concern but are doing so in an effort to ridicule you.

In spite of the very good replies the lady I talked about gave nasty nosy-parkers, when asked a foolish question like why aren’t you married yet, I prefer to assume positive intent.  Assuming positive intent is a way of thinking I read about a long time ago.  It means that when someone says or does something hurtful (within reason), you should assume the person means well, assume that the person is genuinely concerned or was trying to help.

You really need to use common sense when assuming positive intent though.  A guy cannot squeeze your bum in a bus and you’ll assume positive intent.  In that case, you’ll assume he was being an ass (pun intended) and give him a hot slap if you are bold and scream at the top of your lungs if you’re not so bold.  Either way, people will come to your aid, in Lagos at least.

However, if someone asks why you have pimples on your face (which is a stupid question I have asked a friend in the past, not because I was trying to be mean but because I wondered if she was okay), don’t immediately retort with a nasty reply.  Instead, take a deep breath and say “I don’t know.”  In the same way, the next time someone asks why you’re still single, take a deep breath and say “I don’t know.  God’s time is the best.”  That usually gets Nigerians off your back as they are less likely to return with fake unsolicited advice once you bring God into the matter.  Or simply say “I have no idea” and walk away.  If the person has come into your space or you don’t feel like walking away, you can simply keep quiet if they keep talking after that.  Eventually, the person will give up and leave you alone.  They’ll tell people you’re weird but they will leave you alone.  Sometimes, silence really is the best answer for a fool.

What do you say when people ask you why you’re still single?  Let me know in the comments.

Get my new book ‘How to be a single woman in your 30s in Lagos’ today!  Click here to get it.