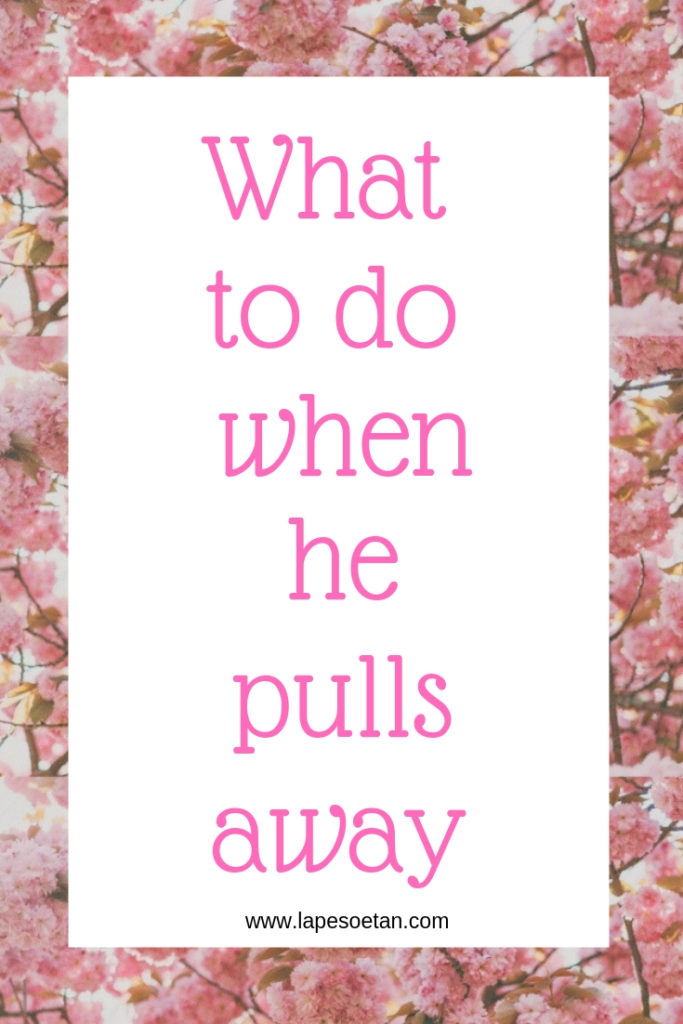 To attract the right man for you, you have to understand men as a whole and that can be very difficult because men and women are different, really very different.  Which is why it is difficult for one sex to understand the other and that’s why I’m here today.  I’m going to be trying to explain one aspect of men’s behaviour.  Today, I’m going to be talking about what to do when he pulls away.

Before we talk about what to do when a man pulls away, we have to realise that a man pulling away can vary depending on the status of his relationship with you.  For example, if a man is just dating you and he pulls away, it might be for a different reason than if a man is in a committed relationship with you or if he is married to you and he pulls away.  So, seeing that there are 2 different situations in which a man might be pulling away, the reasons for that might be different.  So, your reaction to what he does when he pulls away should be different as well.  These are 2 different situations.  I’ll go into both situations now.

The first thing you need to do is to talk to him.  Ask him what is up.  Let him know that you can see that he is acting differently from the way that he was at the beginning.  Give him examples.  Then ask him the reason for his behaviour.  Don’t scream and shout – there’s no need for drama.  Just talk to him and ask him.

If he’s not taking your calls, send him a message saying these things.  He might admit that he is acting differently and he may tell you the reason why or he may not.  After you talk to him, he may start behaving like the way he was at the beginning.  He might start being nice and responsible and communicative again or he may not.  You really cannot determine how the guy will react.

Also, if you ask him what’s wrong and he tries to blame you, don’t immediately take what he says straight to heart.  Ask yourself if there’s any truth in what he has said.  Ask yourself if there’s a way you can make yourself better, not necessarily for him, but because you will be a better person.  You’re doing this for you but remember that you are you.  You will be happiest when you are yourself.  Don’t change yourself just to please someone else.

Now, let’s get into the 2nd situation.  If you’re in a committed relationship or a marriage and the man starts pulling away, talk to him about it.  Like I said earlier, this is not the time to scream and shout.  Just speak to him clearly.  Let him know that he is acting differently and ask him why he is behaving differently.  If he tells you it’s nothing, let the situation go.  Everybody needs some space sometimes, particularly men.  So, if he pulls away and says nothing is the problem, just let him be.  He’ll probably come back to you soon.

If you think you have given him enough time and he still hasn’t come back, he’s still pulled away, then bring up the topic with him again.  If you ask him what is wrong and he is talking to you, listen and try to help.  Trying to help doesn’t always mean that you should take some action.  Sometimes, the best action you can take in this kind of situation is just to listen.  If you want to do more than just listen, ask him how you can help him and the proceed to do what it is that he has asked you for as long as, of course, it’s not anything immoral, unethical or illegal.  Just ask him how you can help him and then take steps to help him in that way.

If you’re in a committed relationship or a marriage and your man pulls away, you’ve taken steps to rectify the situation but nothing is working, this might be time for you to consider coaching.  Talk to your man and let him know that you think that both of you should get coaching.  If he absolutely refuses to get coaching with you, you go for coaching alone.  Even if you go for coaching by yourself, it can greatly improve the situation of your relationship.  Many people don’t know that.

I hope you found these tips useful.  If you want more tips like this from me on a daily basis, follow me on Instagram.  I’ve written a lot of e-books for single women over the age of 30 on a variety of topics that have to do with love and relationships.  If you want to get my free e-books, click here.