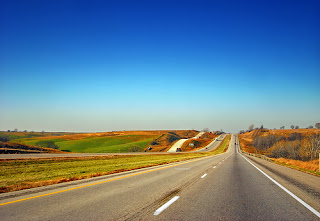 I have a knack for doing things I’m scared of. It’s almost as if I play a game of ‘chicken’ with myself. You could say this was what I was doing when a few months into my first year at university, I decided to go on an excursion with other students in my department, none of whom I knew. It wasn’t that I knew no-one exactly; I knew the names of some of my classmates but that was about it. The excursion was to Ikogosi warm springs in Ekiti state and Erin Ijesha waterfalls in Osun state. I was worried about spending a weekend with people I barely knew and I could almost hear my mother’s voice telling me all the dangers that could befall on the trip but I decided to go it anyway.

The excursion was supposed to be a fun trip organised by the students as opposed to the department. Being typical optimistic (and broke) students, the trip organisers had hired a rickety bus to take us on our road trip. We had been told the journey to Ikogosi would take 4 hours. It took 7. This was hardly surprising considering the fact that the bus broke down along the way. It also turned out that no-one on that bus actually knew the way to Ikogosi. We had to stop several times to ask for directions. We arrived at Ikogosi at midnight. By this time, any barriers I had had been taken down by my fellow travelers who kept drawing me into conversation. I had abandoned The Adventures of Sherlock Holmes several hours before so the chat was welcome.
Ikogosi warm springs is an attraction because the spring is well, warm. In actual fact, at Ikogosi, two springs flow next to each other; one warm and the other cold and it was amazing to touch both of them. The springs seemed a bit like nature’s own hot and cold-running taps. A pool fed by the springs had been created at the site and some students jumped right in. When we had all marveled at the springs, eaten all the food and drank everything we had, it was time to go to sleep at which point we were told accommodation had not been planned. Other students simply turned on a radio and had an impromptu pool party. My new-found friends and I went to sleep in the bus with the mosquitoes.
The following morning, we stopped at some rundown shops to buy breakfast: bread, biscuits and water then we set off for Erin Ijesha waterfalls. The falls at Erin Ijesha aren’t particularly high but they are beautiful so we all squealed with excitement when we saw them. We were warned that the rocks were slippery so those of us who wished to climb up the rocks were advised to take our shoes off. We climbed up the falls (not to the top though) and danced in its spray unwittingly taking part in a wet T-shirt contest. Once we had had our fill of the falls, we headed back to our bus.
The ride back to school was much noisier than when we were leaving; at least it was to me. When we arrived safely back in school, I decided that 1) I wouldn’t tell my mother about the trip for a long time 2) I would never let fear hold me back from travelling and 3) If I ever go on a road trip again, I’ll organise my own accommodation.
If you like this article, please follow this blog by clicking on the Follow button on the right or share this post on Twitter or Facebook. Get in touch with me on Facebook or Twitter. Thank you.