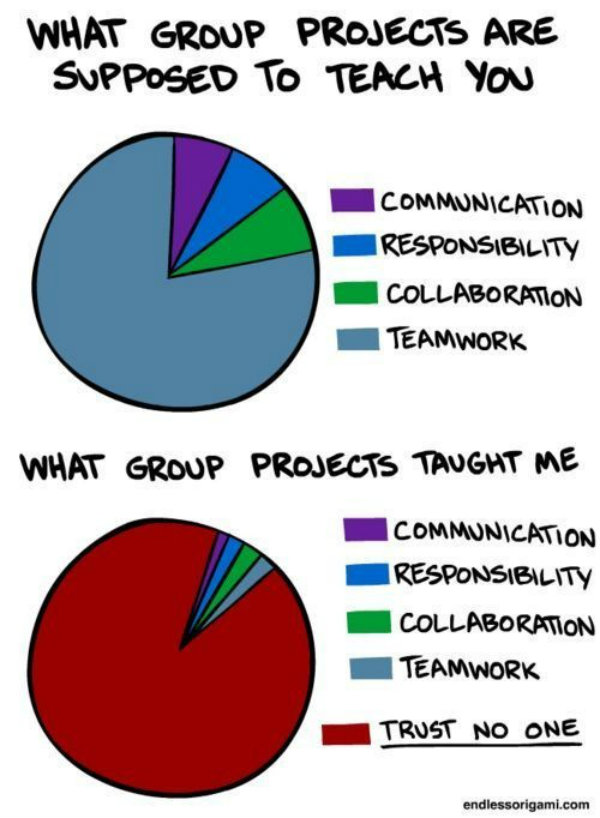 This might sound shocking but I’m going to say it anyway.  Teamwork is over-rated.  Right from school, I’ve never seen the good in the thing.  At school, a group of students would be given an assignment.  Some people would do exactly zero work yet everyone would get the same marks.  And in the work place, a group would be given a project and some people (probably the same ones who contributed zero to their groups at school) would once again do nothing yet if the project was done successfully, everyone would be rewarded and if the project tanked because some people didn’t do what they were supposed to or did it shabbily then you weren’t supposed to point it out because that was “bad team spirit”.  If I had my way, all team work in the office would be banned.

Having said that, the idea behind giving a group of people a task to do makes sense – more ideas will be generated, because there are more hands, the world will be done faster and it will bring about bonding.  However, as with many ideas with the best intentions, things don’t always go according to plan where team work is involved.  More ideas may be generated but if 90% are dumb, what’s the point?  There may be many hands to do the work but it doesn’t mean all of them will actually do the job so if two people in the group end up doing it, it would take them the amount of time it would take 2 people not 5 to do the task so you might as well have given those two people the assignment in the first place.  And as for bonding, having seen group meetings end in shouting matches, tears and slammed doors, I’ve been left wondering if people in groups were selected purely for the amusement of the person who chose the team members.

The truth is that people have different personalities.  Some work well in groups and others don’t.  While some people thrive in brainstorming sessions and meetings and come up with their best ideas by building on the ideas of others, others (like me) work best alone.  I find brainstorming sessions chaotic, I can’t think with noise around me (even other people talking distracts me) and I’ve noticed that a lot idea-generation seems to be about trying to show-off which irritates me.  I don’t know why people insist that brainstorming sessions are absolutely necessary and have no alternative.  I don’t see why someone can’t share an idea online and if someone else wants to build on it, that person could do so online as well.  The result is the same idea-generation without the need to buy coffee and biscuits and waste four hours of everyone’s time – half of which will be spent chattering about things unrelated to the matter at hand.

Of course, if you have no choice but to work in a team on a project, there are basic rules of social etiquette to follow that will make the situation easier for everyone involved:  if someone is talking, wait for them to finish before piping up yourself, pay attention so you don’t ask a question that has already been answered, take notes, be polite and if you are assigned something to do, do it to the best of your ability.  There are bullies who always think their voice is wonderful their idea is the best one and will try to force everyone to think the way they do.  I find it best to ignore people like that.  Do whatever task you have to do as well as you can and you will rarely go wrong.

I truly believe a leader should work with the strengths of the people they are in charge of so if you see that there are people who work great in groups, put them in groups but if you notice that a person produces their best work when alone, for goodness sake, leave them alone to get along with it.

*Yes, I know the Nirvana song is called smells like Teen Spirit but sometimes I like playing with words.  We all need to take pleasure in the little things sometimes J