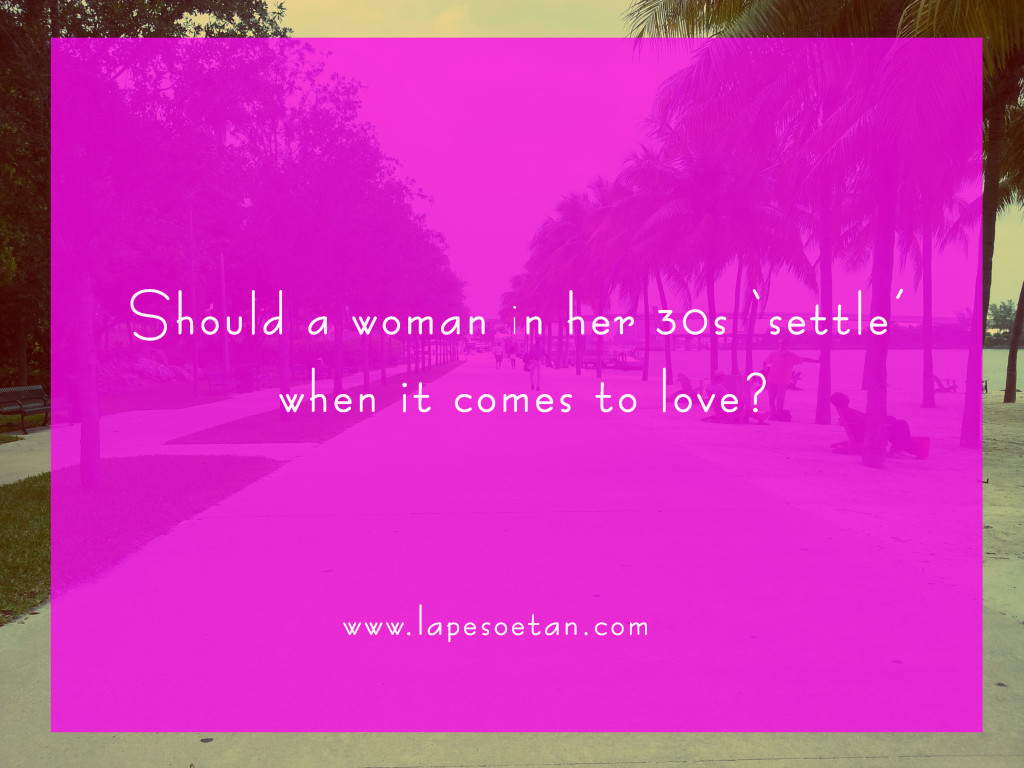 It’s often said that when a woman in her 30s isn’t married, it’s because she’s too picky.  If she were less choosy (and more sensible), they say, she would have been married ages ago.  They say that a single woman in her 30s probably feels she is above everyone else.  They tell her there’s no perfect person, to stop looking for Mr. Wonderful and settle for Mr. Whoever.  At least, she would be married by now if she did.  All this talk essentially says that a woman in her 30s (or maybe even in her 20s) should ‘settle’ when it comes to love.

But what does it mean to ‘settle?  Whenever thoughts like this come to my head, I wish I could open a dictionary and find a definition of ‘settle’ there.  Of course the word ‘settle’ is in the dictionary but not in the sense meant here.  And so, it appears we have to define what it means to settle for ourselves.  When someone tells a woman ‘not to settle for less’, what do they mean?  And when they say she should ‘settle’ for what she can get when it comes to love, what are they trying to say?

To me, settling means accepting what is available.  What you settle for isn’t what you had in mind but is what you have in hand so to speak.  So, following my description of the word, should a single woman settle when it comes to love?  Especially if that single woman is in her 30s?  My answer to this is yes and no.

If a woman analyses herself, her past relationships and realises that she needs to be more realistic when it comes to a romantic partner, then yes, she should settle.  If her ideal partner is a billionaire in his 40s who gives her an expensive piece of  jewellery every day but she meets a guy who’s making enough money to look after himself and sends her credit every week even though she don’t need it and she’s wondering if she should settle for him, my answer would be ‘yes’.  In this case, settling is a good thing because such a woman isn’t really looking for a billionaire in his 40s (how many are there in the world anyway?).  She is looking for someone who is responsible (exhibited by his ability to hold down a job) and who cares for her (implied by sending her credit every week).

A woman shouldn’t settle when it comes to circumstances in a person that cannot or are unlikely to change.  For example, a man’s financial status can change at any time.  You might marry a man simply because of his money and a few years later, he loses it all.  The reverse is also possible.  This means that if a woman is wondering if she should settle for someone despite their less than admirable financial resources (provided the person has other traits that appeal to her), the answer should be ‘yes’ since his finances can change.   On the other hand, if a man constantly yells at his partner, he is unlikely to change.  If all the yelling  upsets his partner, I would say settling for such a person would be a no-no.

Settling doesn’t even have to be about big things like money or a propensity for violence.  It could be based on little things.  For example, I dislike what I call ‘text language’.  You know, using things like ‘ur’, ‘nd’, ‘kk’ and writing without punctuation in text messages.  Text language annoys me to no end.  In spite of this, I have dated people in the past who always sent me messages using text language.  Every single person I dated who sent me messages using text language, I regretted dating.  Text language is a small thing and it’s unimportant to millions of people but it’s important to me.  Using text language was a characteristic of those people that would not change.  I decided to settle in those cases and hated myself for it.

As with my distaste for text language, only you can know what is truly important to you.  There are times when a single woman should settle in relation to love but if you do decide to settle, make sure you’re doing it for your own reasons, not because someone else said that trait or feature in the person you were considering dating doesn’t matter.  You are the one who will be in the relationship therefore only you should decide if and when you should settle.