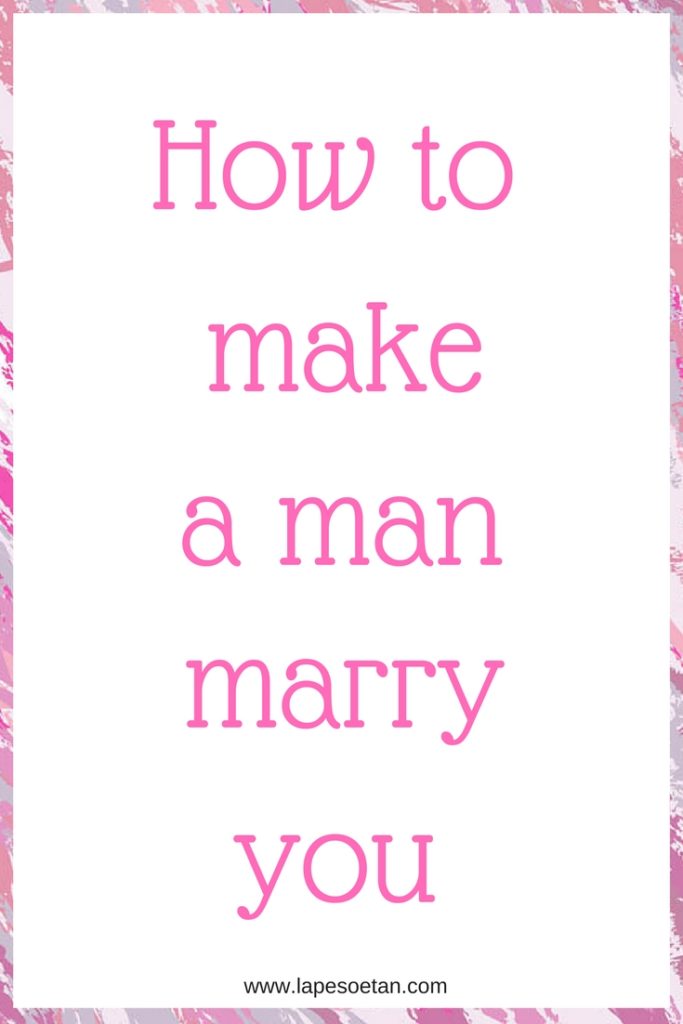 Before we go further, I have to put a caveat here.  Please don’t try to deceive or trick a guy into marrying you.  For example, don’t ‘mistakenly’ get pregnant in an effort to make a guy marry you.  The thing is that you can make a guy marry you by mistakenly falling pregnant but you can’t make him love you.

Many women don’t realise that.  They do this then after marriage, they find that the guy is showing that he doesn’t love them because, in actual fact, he doesn’t love them and they’re miserable.  The wife is miserable and then they start complaining about their husbands and then the marriage becomes miserable for the two of them and the thing just implodes.  You can avoid this by NOT tricking a guy into marrying you.  Don’t deceive people.  Treat people the way you would want to be treated.

So, now that my caveat is in place, I’m going to give you 3 great tips that you can use to make a guy marry you.  Tip number 1 – be a fun person.  If the guy is always happy to be around you, he’s going to want to keep that going.  Eventually, he’s going to realise that the way to be around you all the time is to marry you.  He’s not going to see any way around it so just be a fun person.  Be the kind of person that people want to be around, particularly the guy that you’re interested in or are dating.  That is tip number 1.

Tip number 2 is don’t sleep with him on the first date.  Now, I know that we’re in the 21st century and sex is more in the air now and it’s more open and everybody is doing it and things like that but avoid sleeping with somebody too early in the dating relationship.  In fact, what I usually say is ‘the more you want to marry a guy, the more you should delay having sex’.  This is because it makes him even more interested in you.

I know there are some cases where a girl didn’t sleep with a guy for 6 months then she has sex with him and the guy just disappears but those cases are rare and they usually happen when that is all the guy wants from you or if the woman has marketed herself in such a way that sex is the only thing she has to offer.  You are more than sex.  You have more to offer than sex so delay having sex with the guy if you know you want to marry him.

Tip number 3 is to give a guy space.  It’s not by policing a guy and being all in his business that the guy is going to marry you.  In fact, that might make him do the opposite.  It might make him run away.  So, give him space.  When you give a guy space and you’re building your own life, after a while, he’s going to realise that he doesn’t really like all this space that you have given him.  He’s going to want to get closer to you and it’s going to occur to him that the way I can be with this woman more often and to have her around me more often is to marry her.  It’s going to occur to him and he’s going to do it.