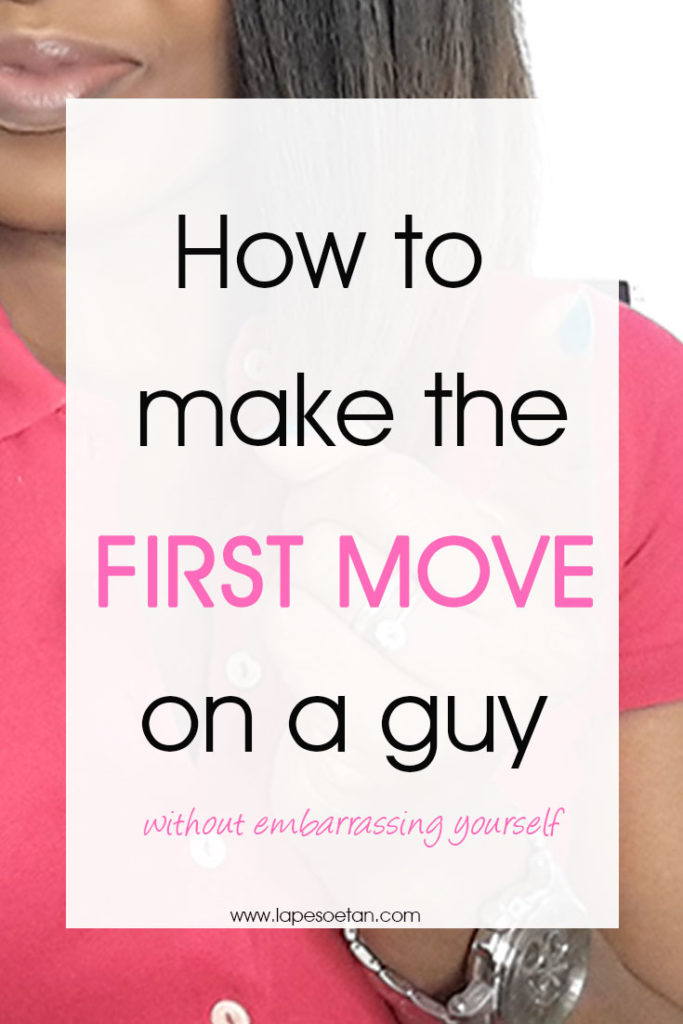 Today, I’m going to be talking about how to make the first move on a guy without embarrassing yourself.

As a woman, I know that many women have been in the position where they want to make the first move on a guy but are unsure.  You see a guy you like, you see him from time to time, he seems to like you, you like him but nothing seems to be happening.  What can you do?  You’re getting impatient.  You want things to move on but at the same time, you want to remain a lady.  What can you do?

The thing to remember is that many women have been in this position and many women make the first move on guys so no matter what some women tell you, you shouldn’t always believe them.  Many women make the first move on guys.  And women have been doing this for hundreds of years.  It’s just the way they’ve been doing it that has changed.  So maybe 200 or 300 years ago, they were doing things like pretending to faint in front of a guy they liked or something, ridiculous things like that.

Today, we’re really lucky.  We don’t have to go to extremes like that.  We have all sorts of means to make the first move on a guy and still keep our dignity.  The first thing I want you to remember is that you should never appear desperate.  Even as a woman, when a guy is desperate and is all over you, you’re a bit turned off.  Sometimes you even wonder what is wrong with him.  It’s the same thing for guys.  Never appear desperate when you want to make the first move on him.

Another thing to remember is that it’s a lot easier if the guy even has an idea who you are.  If he doesn’t know who you are at all and you’re making a move on him, it can end pretty badly.  A good thing to remember is, if you get the feeling that he likes you, then it’s a good sign that you should make your first move.

Making the first move is easy in today’s world.  What you can do is, try to get his phone number or look for him on social media.  Once you’ve found him on social media, you can start to go through his feed and ‘like’ some of his posts.  Don’t ‘like’ a million posts of his at once.  Just ‘like’ a few over a few weeks and then after a few weeks, you can send him a direct message or if you have his phone number, you can send him a text.

What you can do is send him a very short message and end it with a question.  Say something like “I like the pictures that you take.  You always look like you’re having fun.  What has been up with you lately?”  Or find a way to reference something that you know that he has been up to in his daily life via social media or from day-to-day mixing with him.  So you can say, “How was the conference that you went to in Senegal?” or you can say “I saw that you went on holiday to South Africa.  How did that go?  What was the most fun for you?”  Just end the text or message with a question so that he has to reply.

After you do that, just wait.  Be patient.  After a week, if you haven’t had a reply from him then you can send another message, a similar one to the first you sent.  Keep it short.  Keep it sweet and end with a question.  If he still doesn’t reply after a week then you might have to admit that he is just not that into you.  And it’s okay.  There are many guys that you’re not into yourself.  It’s fine.  The good thing is that you tried.  If you never try, you’ll never know.  So that is a good thing.

If it has happened and the guy is not into you, take a break, nurse your ego and then try again with someone new.  Half the time though, the guy is going to reply.  He is going to get back in touch with you and you can take things from there.  You can move on.  The world is such a big and open-minded place today, there’s no harm in making the first move on a guy.

I’m a relationship coach who helps single women over 30 attract the right relationship into their lives and I’ve written a ton of e-books.  You can get some of my e-books by clicking here.