It’s not a very romantic idea but goal-setting really can help you get married. It worked for me.  To be clear, I actually set a goal to be engaged (not married) by a certain time.  All the same, it worked out.  It didn’t happen by magic though.  After I set that goal, I worked to make it happen.  The frustrating thing about working towards an emotional goal like getting engaged or getting married is that there aren’t many landmarks that will let you know that you’re on your way to achieving your goal.  Sure, if you’re boyfriend-less (like I was) when you set a goal to get engaged, a good sign that you’re doing something right is when you get a boyfriend.  Other than that, there aren’t that many signs that will tell you you’re on the right track.  That’s because a lot of the work you do after setting this kind of goal is in the mind.  Basically, this kind of goal-setting requires you to mindset work.

Another caveat I want to put in place here is that before I set a goal to get engaged, I had set goals several times before that I would get married by a certain date but they never worked and I will tell you why later in this article.  The point I’m trying to make here isn’t that goal-setting doesn’t work because I didn’t get married all those times.  Goal-setting does work but what I learned later in life was that I had set my goals in the wrong way.

To make a success of setting goals and applying it to getting married, here’s what you need to do: 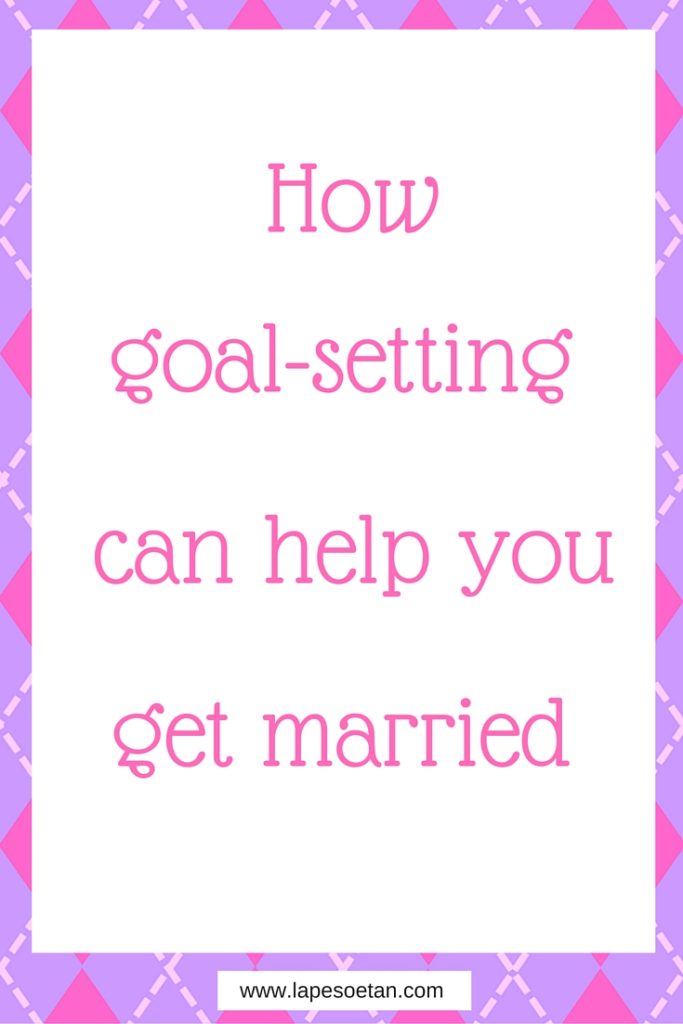 You’ve probably heard of S.M.A.R.T. goals before.  A S.M.A.R.T. goal is one that is Specific, Measurable, Attainable, Relevant and Time-bound.  Not every adjective in the S.M.A.R.T. is relevant when it comes to applying it to getting married though or maybe some of the descriptors just seem repeated.  For example:  if your goal is to get married, it means your goal is already both specific and measurable.  I believe that anyone can get married if they really want to so marriage as a goal is attainable.  If you really want to get married and set it as a goal, that means marriage is relevant to you.  Finally, it is important to apply timing to your goal and make it time-bound.  Following all of that, an example of a S.M.A.R.T. goal in this context would be: ‘I am married by December 2016.’  Or if we want to be even more specific (and modern in this day and age of same-sex marriages), the goal can be re-written as: ‘I am married to my ideal man by December 2016.’

Make sure your goal is relevant to you

I know relevance in goal-setting was mentioned in the point above but it is such an important aspect of goal-setting that I had to make it a point of its own.  For a goal to be relevant to you, you have to be sure that you and only you want it.  For several years, I set myself the goal of getting married but deep down, I didn’t really want it at the time.  I saw marriage as a prison.  I didn’t know anyone whose marriage I admired.  I just wanted to get married because I felt it was time.  I believe that because I didn’t truly want to get married, it didn’t happen.  Be sure marriage is what you want before you waste precious time setting goals about it.  Don’t spend ages setting a S.M.A.R.T goal about getting married if all you want to do is move to America to pursue a singing career.  That’s an extreme example but you know what I mean.

Take it in steps

There are very few big goals that happen in just one step.  Let’s say you’re an assistant manager in the organisation you work and you dream of becoming the managing director.  It makes no sense to set a goal saying you will be managing director in a year’s time.  I mean, I know nothing is impossible but it is unlikely to happen.  Usually, you would have to work your way up the ladder, maybe change jobs and then in a few years, you’ll find that you’re managing director of that company like you dreamed.  It works in the same way if marriage is your goal.  If you don’t have a boyfriend at the moment, don’t set a goal to be married by the end of the year.  It has worked successfully for a few people I know but is just more difficult to achieve and more likely to lead to disappointment.  Instead, set a goal to be engaged first.  When that happens, you’ll see that goal-setting works and will be more confident at applying it to getting married and even other aspects of your life.

This post has turned out way longer than I expected it to be but I wanted to put in as much information about goal-setting as I could.  If you really do want to get married soon, I hope you try these tips.  When you do, let me know how it goes.  I have every confidence it will work for you.  Good luck!