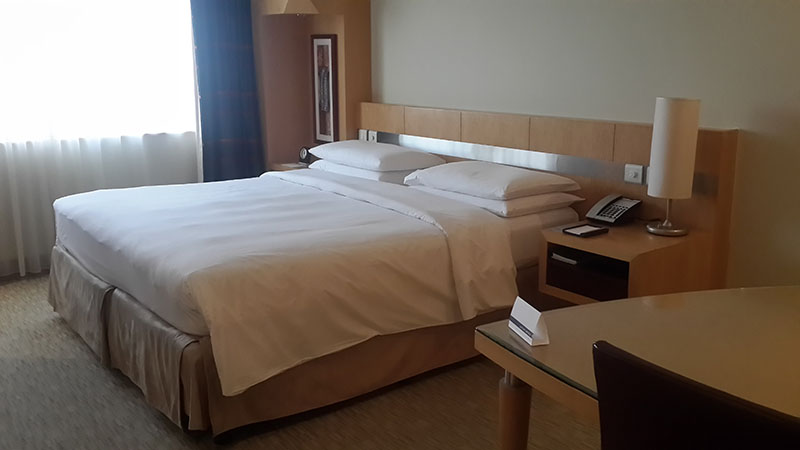 A bedroom at the Hyatt Regency, Dubai

The Hyatt Regency Dubai is a large hotel in Deira, Dubai.  It has over 400 rooms and is a 15-minute or so drive from the airport.  The hotel is about 30 minutes by taxi from Dubai Mall (a very important measure for me when choosing a hotel in Dubai 😉 ) and is walking distance from the gold souk.  There’s also a metro station about 2 minutes’ walk from the hotel.

I was wary about staying at the Hyatt Dubai because I’m not crazy about large hotels.  I also wasn’t thrilled at the idea of staying so far away from Dubai Mall.  You would think I’m an avid shopper from the way I talk but I’m not really.  It’s just that after walking around the mall all day, the last thing I want to do is endure a long taxi ride in Dubai’s worsening traffic situation.  I also generally don’t like the Deira area.  It’s an old area of Dubai and is considered the more authentic part but I prefer the newer, more modern part of Dubai.  In spite of all this, I was convinced to stay at the Hyatt and I’m glad I did. 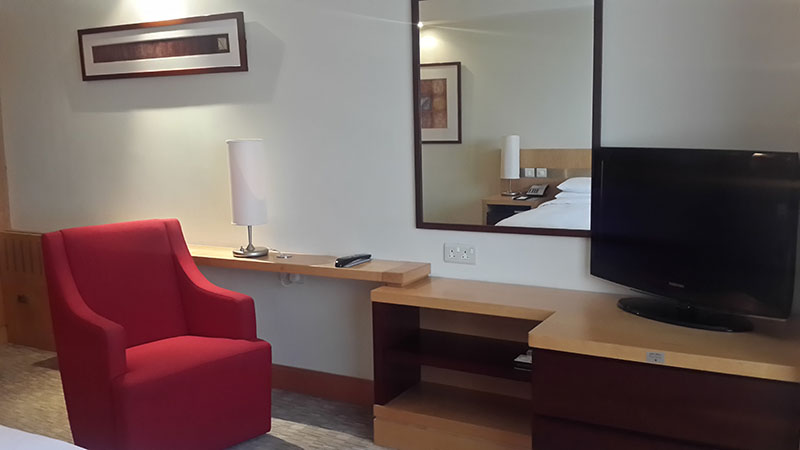 This chair was a rotating one.  I loved it.

When I walked into the Hyatt Regency Dubai, the first thing that struck me was the large number of people milling about.  It’s a very big hotel so I guess I shouldn’t have been surprised.  The number of guests the hotel has explained the hotel’s need for its 4 reception desks.  I had thought that checking in would be a long process but it was surprisingly quick.  My plane landed in Dubai in the morning – before their check-in time so after eating breakfast at The Kitchen (one of the hotel’s 4 restaurants), I whiled away time at the mini-mall linked to the hotel.  Yes, the hotel has its own mall 🙂 It’s a very small one with a supermarket and a few designer clothes shops but it was enough.  The mini-mall also houses an ice-rink and the hotel’s pub and nightclub.  Yes, the Hyatt has those too.  In total, the hotel has 4 restaurants, a bar, a pub, a karaoke bar, a nightclub, a swimming pool, a gym and a golf-course.  You can spend a week at the Hyatt, never leave and never be bored.

Aside from all that, there were other small touches about the Hyatt Regency that I liked.  For example, when I called Guest Services on the phone, I was greeted by name and housekeeping comes ‘round twice a day.  My top tips about Hyatt Dubai:  talk to the staff.  They are very polite and are quite helpful.  One of them recommended me taking the metro to Dubai mall and gave me detailed directions on how to get around in town.  My second tip is if you plan to go to the gold souk from the Hyatt, take a cab there.  Although it’s close by, it’s about 15 minutes’ walk away and after doing that much walking, wandering around the alleys of the gold souk will quickly get tiring.

I might not stay at the Hyatt Regency again simply because I don’t like its location but I highly recommend it.  There’s a lot to do in the hotel, the staff is polite and the food is delicious with an amazing variety available.  You should consider staying at the Hyatt Regency next time you’re in Dubai.