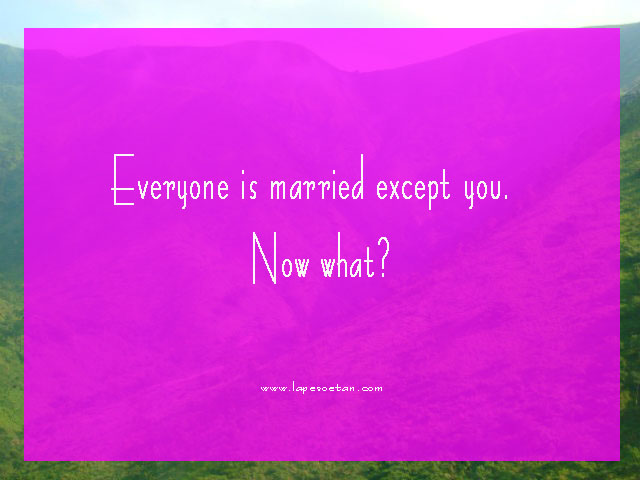 As a single woman in your 30s, a time will come when it seems like everyone except you is married.  It can be a lonely, embarrassing experience especially if you have a closely-knit group of friends and they all get married making you feel like there’s something wrong with you.  Sometimes, it feels like your friends set out to make you look like the odd one out but of course that isn’t true.  It’s just the voices in your head spreading rumours.

In my case, I was slow to pick up on the ‘Oh-my-God-everyone-is-married-except-me’ vibes.  The first of my friends to get married did so at 25 but I thought that was pretty early so I wasn’t bothered.  Another good friend got married at about 28.  I thought ‘Okay.  I have two friends who are now married but it doesn’t matter.’  Not much changed in our friendship because we kept in touch with each other on a regular basis.

However, when yet another male classmate from university announced his wedding, I realised that almost all the guys from my class were now married and I started to feel uncomfortable  When even the guys your age start getting married, you know that it has now become something close to an epidemic.  What made it a little easy for me to cope with the feeling of being left behind marriage-wise was that curiously, many of the girls from my class weren’t married.  It appeared that more guys than girls from my class were married.  What that taught me was that the idea that everyone but me was enjoying marital bliss simply wasn’t true.

For every person I knew who was married, I knew of another who wasn’t.  Although once in a while, someone I knew would comment on my not being married, most people didn’t.  A lot of the embarrassment I felt about being single was something I created inside my head.

Staying happy as a single woman when your friends are married depends, to a large extent, on you.  The rest of it depends on your choice of friends.  If you have chosen thoughtful, caring friends, they will never make you feel stupid or worthless for being single.  And if you made a mistake and chose tactless, thoughtless people as friends, you can always drop them and make new ones.  A friendship is not a marriage.

Most people in the world get married in the end so it’s likely that you will too.  Relish the period in your life that you are single and you are more likely to enjoy yourself when you finally do get married.

To read my other posts on how to be happy as a single woman in your 30s, click here.