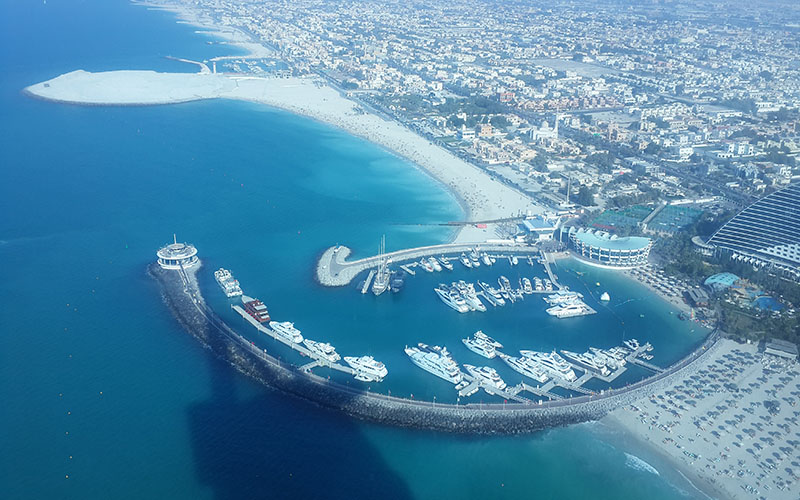 One of the most famous landmarks in Dubai is the Burj Al Arab, often described as the world’s only 7-star hotel.  Apparently, there isn’t really anything like a 7-star hotel, the ratings only go up to 5 but somehow, Burj Al Arab is often called a 7-star hotel.  That label may be apt though because the hotel is known for its opulence and extravagance and that opulence and extravagance is made abundantly clear in the hotel’s Al Muntaha restaurant. 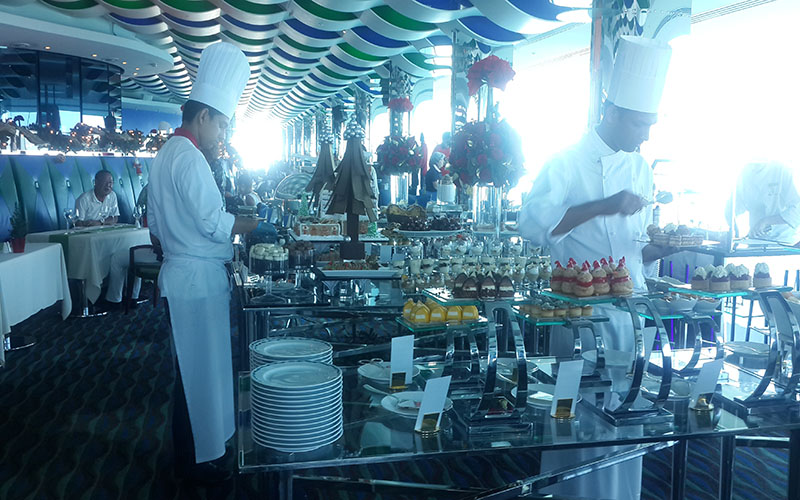 To get to Al Muntaha restaurant from the hotel lobby, you take a dedicated elevator to the 27th floor.  The elevator ride is quite something as your ears pop the higher you go, just like they do on an airplane.  On arriving on the 27th floor, you’re greeted by the restaurant’s staff and your reservation checked and confirmed.  The décor of the restaurant is…different.  It’s all blue and metal and funny lights making it a nightmare to take pictures.  I wonder if that was the goal. 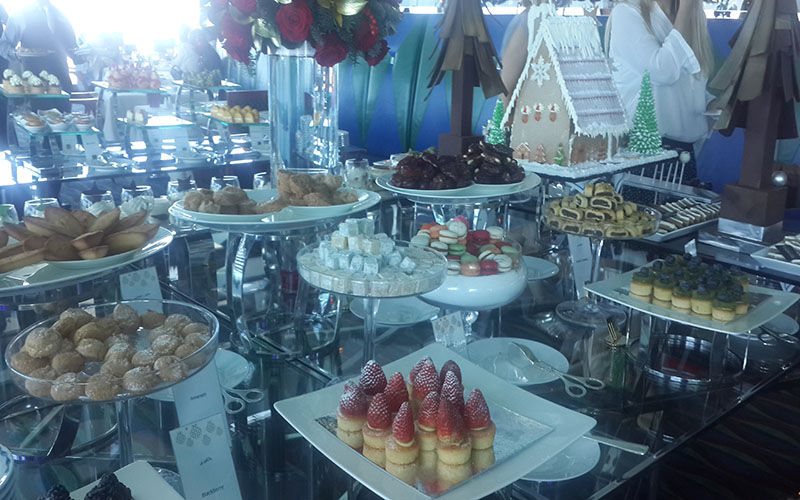 Part of the dessert section in the restaurant

Friday brunch is popular in Dubai, a bit like how Sunday brunch is popular in Lagos.  Since Friday brunch is pretty much standard with hotels in Dubai, Burj Al Arab decided to go all out with theirs and they succeeded.  I have never seen so much food in my life.  There was European, Arabian and Asian cuisine – everything from roast beef to Moroccan tagine to sushi and more.  There was caviar and lobster and couscous.  The desert section had a wider array than many cafes.  It was unbelievable.  There was so much food at Al Muntaha’s brunch that I think it would be impossible for anyone to try it all.  Although the food was good, I can’t say it was the best I’ve ever had.  I’ve enjoyed the food at Chinese restaurants in Lagos more.

While the food at Al Muntaha wasn’t anything out of the ordinary, the views from the floor-to-ceiling windows were awesome and are best enjoyed with the glass of sparkling wine that comes with brunch at the restaurant.  At over $200 per person, brunch at Al Muntaha is definitely expensive but this is Burj Al Arab we’re talking about here.  Everything is expensive.  In all honesty, I wouldn’t hurry back to Al Muntaha for another meal but it was a once in a lifetime experience and I’m glad I had it.