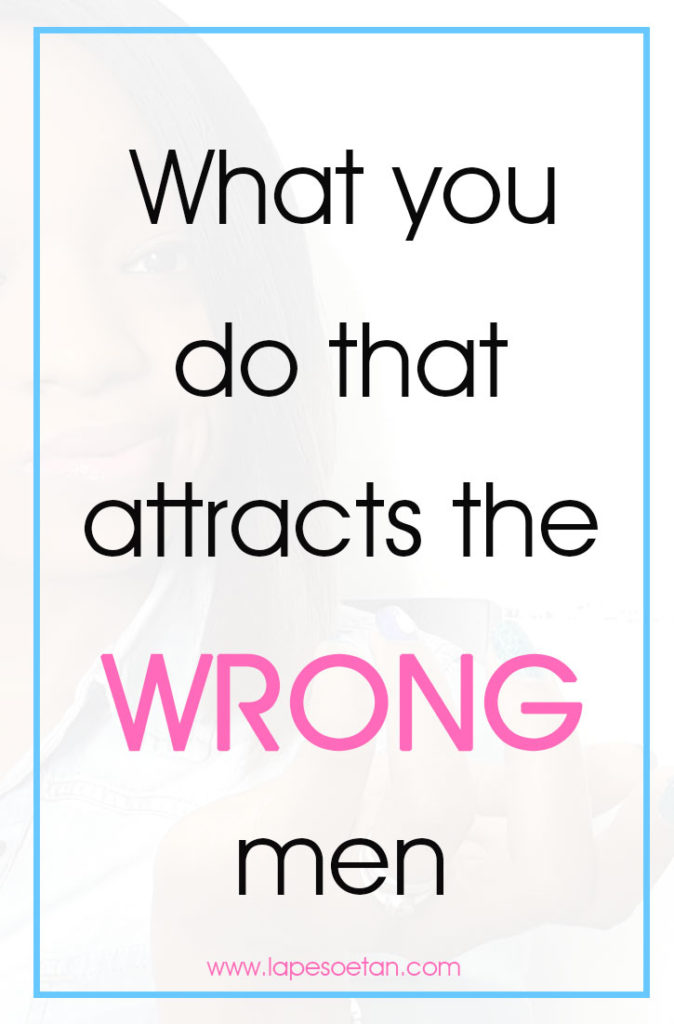 This post is about what you do that attracts the wrong men.  On a regular basis, I get questions from women asking me what they’re doing that attracts all these guys they DON’T want.  Because I’ve gotten this question so many times, I decided to make a video about it.

First of all, let’s describe the term ‘wrong men’.  Wrong men here are men who cheat on you, men who pester you for money, men who treat you badly and things like that.  They are just the wrong kind of guys, guys that you don’t want in your life.

These sorts of men are attracted to all women, particularly those who are beautiful, hardworking and intelligent.  They like good things too – just like you!  They really are attracted to all women.  However, not all women give them audience.  If a guy has no job and no interest in getting one but he has a ‘sweet mouth’ and he makes you laugh so you make out with him from time to time, realise that YOU have CHOSEN to keep him in your life.  It is not some other random person.  You are the one who has attracted that guy and you’re the one who has chosen to keep that guy in your life.

There are 2 reasons why you’re attracting the wrong guys.  The first one is that you’re too nice and the second one is that you give them audience.  If a guy gives you a sob story – his wife doesn’t understand him, his ex won’t leave him alone, nobody will give him a job because he went to a polytechnic – that is none of your business.  Please realise that.  You do not have to choose to leave that guy in your life simply because he gave you a sob story.  You’re not being a bitch if you decide you don’t want that kind of guy.  You are creating a life that you love.  You’re creating a life that makes you happy and it does not include him.  Don’t let anybody guilt-trip you into dating them.  It is your life and you can do what you want with it.

The 2nd thing is that you’re giving them audience.  If you don’t like a particular guy, you feel that he is not right for you or you feel that he’s not the kind of guy that you want to be in your life then you have to take action.  You have to take actions that match your thoughts.  Stop dating that kind of guy.  Stop making out with him.  Stop going to places with him.  Don’t even give him your phone number.  Don’t reply his texts.  If he calls you, don’t pick up the phone.  You have to make sure that your actions match your thoughts.

I’m a relationship coach who helps single women over 30 attract the right relationship into their lives and I’ve written a lot of e-books.  You can get some of them by clicking here.