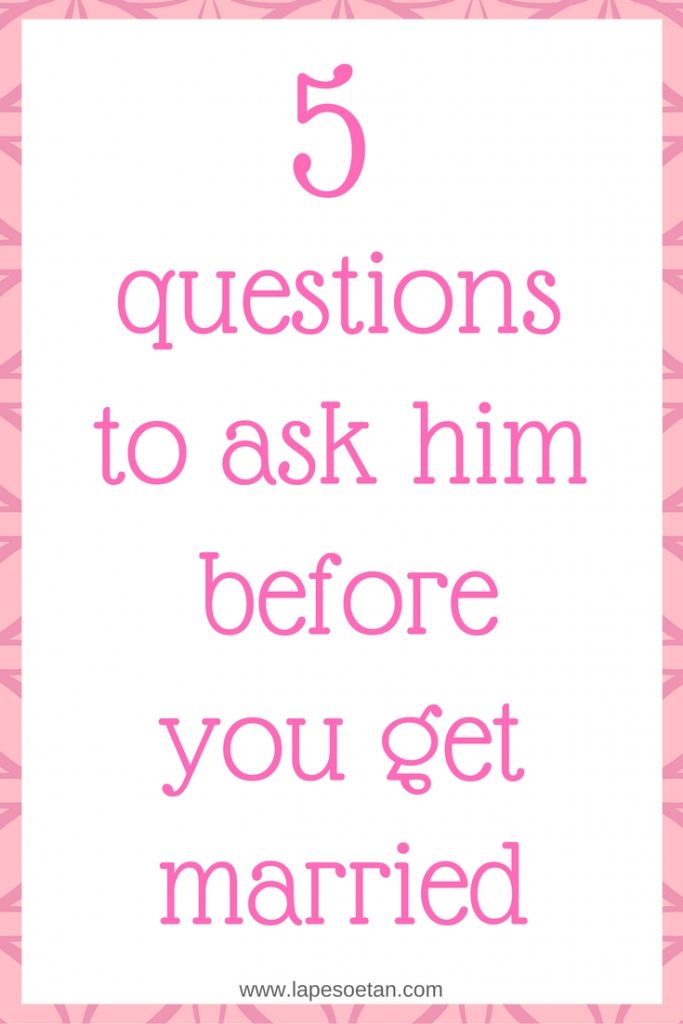 Now, people can lie and they often do especially if they know what it is you want to hear and if they want to please you in order to achieve a particular goal.  You can’t stop people from lying to you but if you date someone for a while, you may begin to sense when they’re lying to you and will therefore be able to take better decisions.

Asking a guy certain questions while you’re dating him will help you decide if the two of you should be together and if you really should get married.  These questions are a guide to help you know your man better.  They don’t guarantee that you’ll live together happily ever after but they will give you an idea of how happy you’ll be together.

Don’t ask these questions all in one day and don’t ask them in a formal way.  You’re not interviewing him for a job position (even though in a way, you are 😉 )  You’re asking these questions because you like this person and you want to know if you and him have a future together.  Make the conversation as causal and as fun as you can.

By the way, I’m creating an online course that will take your relationship from good to great!  If you’d like to be notified when it’s about to start, click on the image below and fill in the short form you’ll see.

If you’re in a relationship with a guy, here are 5 questions you should ask him before you marry him:

1. Why do you want to get married?

2. How do you feel about children?

The world is changing and more people feel less need to have children.  More people are being open about their desire to NOT have children.  It’s best to find out if your man doesn’t want children before you marry him.  Please don’t make any assumptions.  If he does want children and you do too, great!  Find out more about what he thinks of children.  How many does he want?  How does he feel about having all girls?  What would he do if he found out that as a couple, you couldn’t have kids?  I once dated someone who was honest and said he wouldn’t handle such a situation well as he felt that the whole point of marriage was to have children.  He also didn’t like the idea of adoption.  Try to get your guy to say as much as he can about children.  It is so important.

3. What are your thoughts on religion?

Religion is a big issue which is why it’s surprising that so many couples avoid the topic before getting married.  If religion is important to you, it’s particularly important to ask questions about religion before marriage.  Does your guy practice any religion?  How does he feel about it?  If you practice different religions, would he expect you to switch to his or would he be willing to change to yours?  What religion would he want the children to practice?  If you practice the same religion, is it as important to him as it is to you?  If you believe in going to church several times a week, would he go with you or would he resent your going?  Is he neither here nor there as regards religion but is willing to let you practice yours as you deem fit?  Be aware that some men go to church with their partners to present a certain image to their partner but then stop as soon as they get married.  Like I said, you can never know someone completely but through little hints they’ll give you, you’ll know how they really feel about things.  Be observant.

4. How do you feel about women working?

Women may have come a long way but some men still believe women belong in the kitchen.  Find out what your man feels about the issue.  Some men don’t want their wife to work and that’s fine.  Just make sure you know that before you get married.  On the other hand, some women who work believe that as soon as they get married, they should stop working.  If the man they’re with doesn’t agree with that, there’ll be problems if they go ahead and get married.  Ask your partner what he thinks about working women before you guys decide to get married.

5. What are your dreams for the future?

This is a great question because you’re not boxing the guy in.  His thoughts can wander free and reveal the true him.  Ask him how he imagines everyday life would be.  Would both he and his wife work?  Would he start a business?  Would he be a stay-at-home dad?  Would he want to move to his village after retiring?  After he answers your questions, ask yourself if his dreams match yours.  If they do, that’s fantastic!  And if he waxes on and on about his future but doesn’t mention you, you know that you don’t feature in his future.  Absorb that information and take a decision.

Questions can reveal a lot when answered truthfully.  Don’t be afraid of what the answers may be.  See them as a way to plan your future and be happy you’re taking steps to create a future you’ll love.

If you want help on how to take your relationship from good to great, I’m working on an online course that will help you do just that.  Click here (fill the form you’ll see) and you’ll be the first to know when the course is about to start!