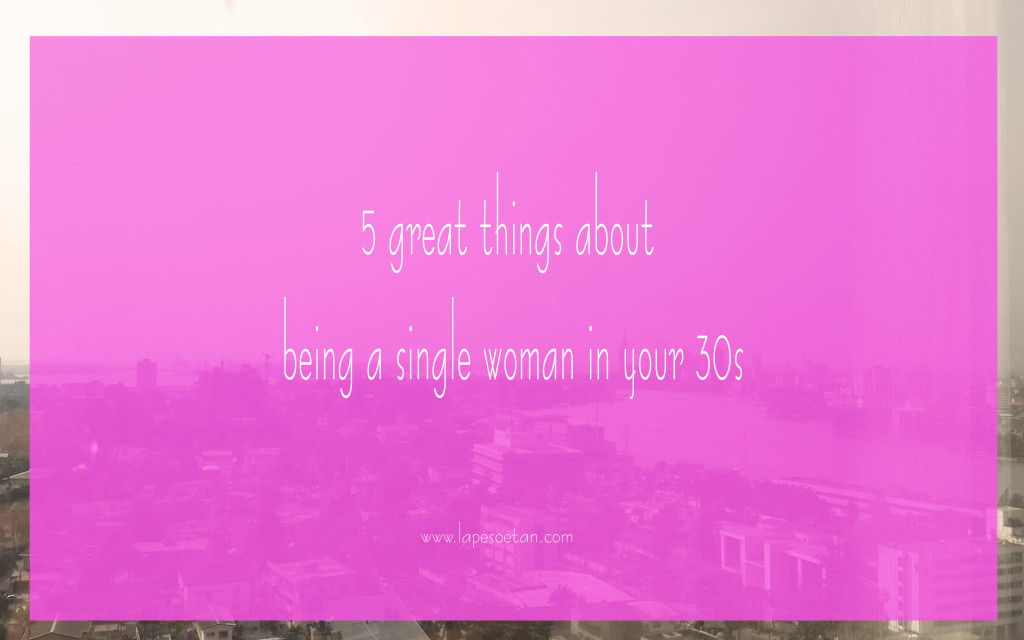 Lots of women want to get married and marriage is great but there are lots of things that are pretty great about being single too.  Sometimes, it’s difficult to think of anything positive about being single in your 30s so this is a little reminder of some of the great things about singledom:

If you’ve played your cards right, that is, worked diligently, you should be earning way more money than you did in your 20s.  I remember I earned N15,000 a month at my first job.  There were cleaners at that time who earned more than I (a university graduate) did.  I loved that job though and I learned a lot from it so I have no regrets.  At that time though, I couldn’t even save and fantasised about being able to buy glossy women’s magazines monthly.  These days, I’m jaded about magazine-buying.  I even have a stack I haven’t gotten through at home.  The decadence!  Whenever I look at the magazines, I smile because I remember when I never ever thought that would happen.  Even if you don’t earn as much as you would like now (who does?), you probably earn more than you did in your 20s and that’s always something to be grateful for.

I know a single woman in her 30s who says one of the best things in her life right now is that she can travel to far-flung places without having to ask anyone’s permission and without having to listen to someone moan about how much the trip will cost.  What I find most interesting about her is that she doesn’t make that much money but she saves what she can and travels that way.  She’s also a good worker so one Christmas, her office rewarded her with a trip to South Africa.  I didn’t even know things like that happened in Nigeria!  She’s so happy with her life now that she prays that when she meets the man she wants to marry, it’ll be one who appreciates how much travel she has done and is excited to share that part of her life with her.  Without complaining about money.

It is in Nigeria that you’ll find a woman in her 30s whose parents tell her to be home by 9pm.  This is real.  I’ve even heard of a single woman in her 40s whose parents often told her the same thing.  True story!  Some may blame this situation on the fact that the single woman still lives at home but it is also the case that it is frowned upon in Nigeria for a single woman to live on her own if her parents are alive and in the same city as her.  It’s like a cycle you can’t get out of.  But anyway, if you’re even mildly assertive, curfews are something that should end once you hit 30 (if they haven’t by then).  Don’t know how to handle the situation?  Here’s an idea.  First of all, make sure you have a Plan B, a place to stay for a while, in the unlikely event that you are thrown out of your home for being a wayward child (adult?).  Then when next you’re told to be home by 9pm, ignore the statement, come back at 1am and don’t apologise for it.  Do this regularly for a while and eventually the curfew-giver will give up.  If not, you may have to move out which may be for the best in the long run anyway.

Many people have fewer friends in their 30s than they did in their 20s.  As you get older and you have more work, family and general life commitments, it takes more effort to stay in touch which means only the fittest of friends will survive.  By your 30s, you should have better friends, the ones who slept with your boyfriend, didn’t come to see you when you were ill because there was no-one to bring them and who insist on being friends with the girl who spread rumours about you should have been dropped.  They may not be there every day but by your 30s, you should have friends you can rely on.  They are loyal, genuinely good women who make you laugh and strive to be better people.  They are women you are happy to have around always.

5 You know yourself better

This means you’re less likely to do things you’ll regret.  Here’s a very simple example:  a single 30-something friend of mine never drinks alcohol.  She doesn’t like the taste of alcohol or the feeling she gets after drinking it.  Recently, another friend offered her some alcohol and she refused.  She said “If at this age, I don’t drink alcohol, it’s not likely I’ll start now or in the future.”  She’s a cool girl and she’s fine with her friends drinking alcohol even though she doesn’t.  You know your own mind when you’re in your 30s and are less likely to yield to peer pressure.  That makes you a stronger, happier person.  Anybody who was bullied in secondary school will appreciate being able to rise above the senseless jeers of others.  It’s a gift that comes with being single in your 30s so embrace it!